Phoenix Reisen’s Artania is a ship that needs no introduction. She is not only the largest ship in the current Phoenix Reisen fleet and star of the German TV docu-soap Verrückt nach Meer (Crazy about the Sea), but has also gained fame ever since she entered service in 1984.

Built for Princess Cruises as the largest passenger ship ever purpose-built for cruises, she was also the first cruise ship to have only outside and balcony cabins. In fact, she has been so far ahead of her time when she went into service in the mid-1980s that even 35 years later she effortlessly captivates a very loyal following while other cruise ships of her generation are finding it increasingly difficult to remain competitive.

That said, Artania has not gone through 35 years of service without changes. In 2005, the ship was transferred internally within the P&O fleet and moved from Princess Cruises to P&O Cruises; the American Royal Princess was restyled as the British Artemis. The onboard casino was scaled down, the Princess Court Piano Lounge became a bar and the decks were named after old P&O liners. More extensive changes, however, were made when Artemis was sold to Phoenix Reisen in 2011 and the former Riviera Club converted into a second restaurant, the Artania Restaurant. But there still are plenty of cosy lounges remaining: the Casablanca Bar for example where intimate concerts take place in the evenings; the Jamaica Club which serves as a games and card room; and of course the Pazifik Lounge at the base of the ship’s funnel. 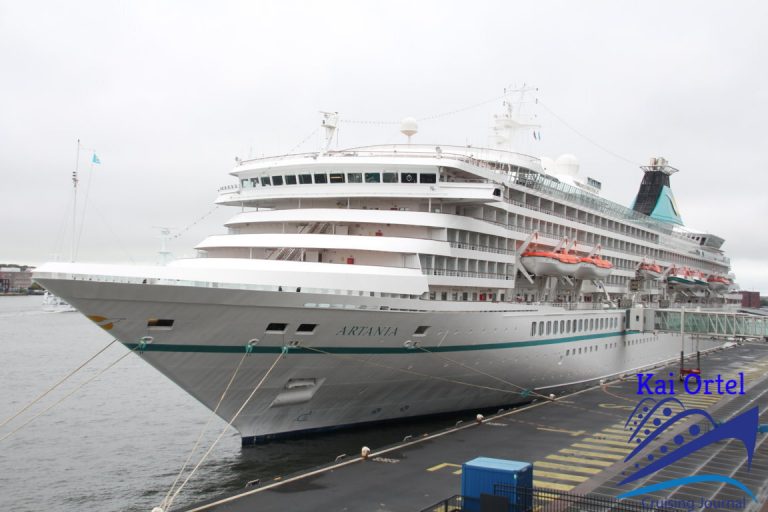 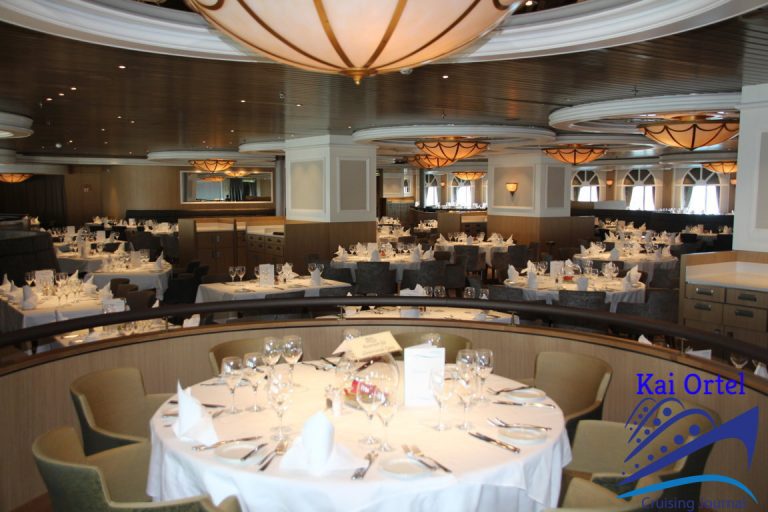 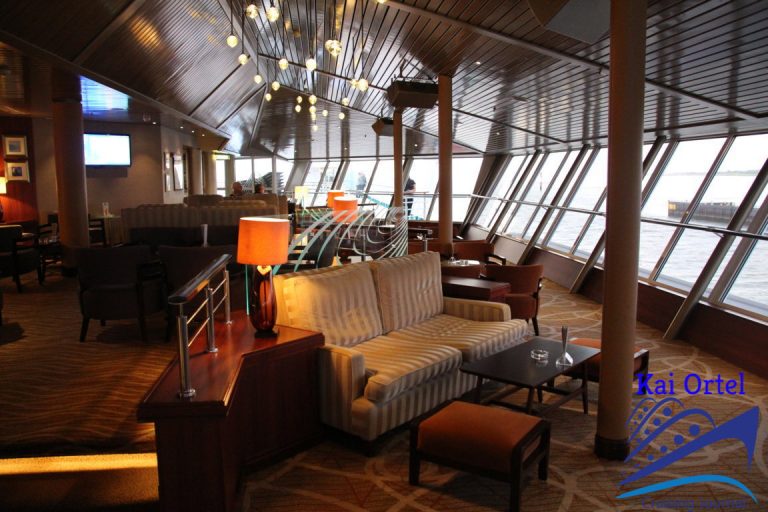 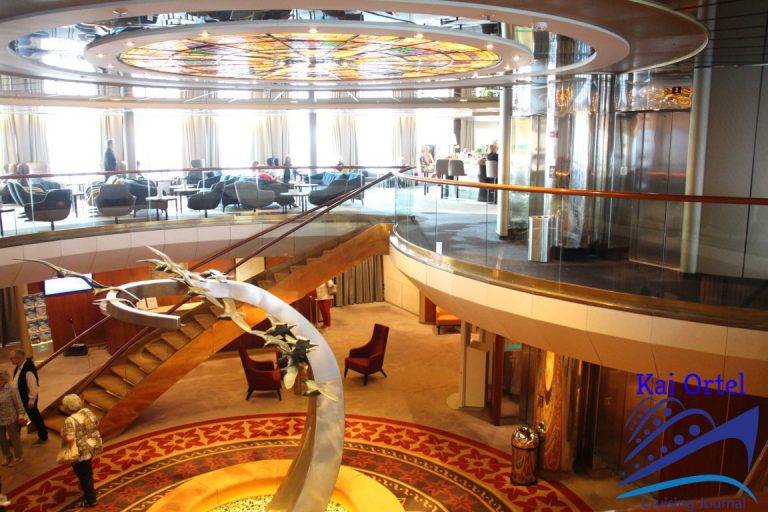 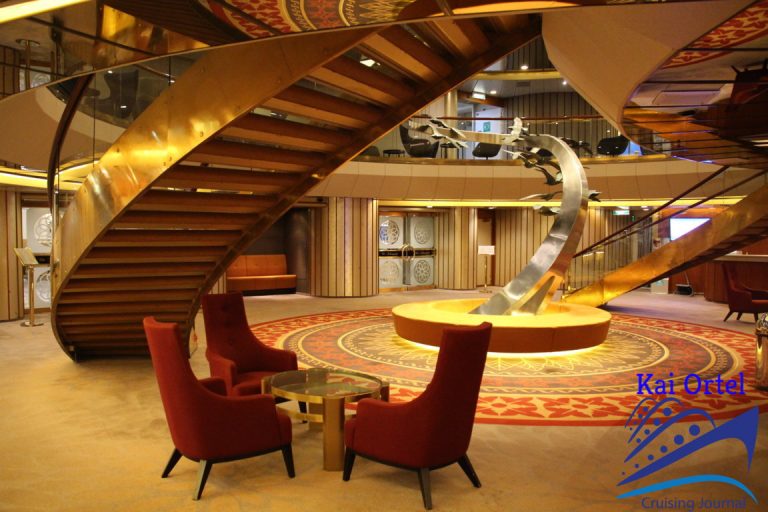 Artania is part of the five-strong fleet of Phoenix Reisen, a German operator which entered cruising in 1988, using the chartered Maxim Gorkiy. In fact, Artania was bought to replace the latter (which was scrapped in early 2009) – a role she has managed to fulfil bravely and more than satisfactorily ever since. The other members of the Phoenix Reisen fleet are the Amera (ex Royal Viking Sun), Albatros (ex Royal Viking Sea), Amadea (ex Asuka) and the time-chartered Deutschland. While during the summer months, Artania is deployed in Northern Europe, sailing on both shorter and longer itineraries from Bremerhaven, she becomes a real globetrotter in the off-season, even going a world cruises regularly. The gallery of harbour plaques on display onboard impressively testifies to the fact that Artania has literally travelled the world.

My own Artania experience was a four day North Sea cruise from Bremerhaven to Harwich and Amsterdam in autumn 2019. My home during this cruise was balcony cabin no. 6500, a refuge that left nothing to be desired. It was fitted with a bed, TV, telephone, mini bar and safe on one side and a large sofa on the other. Between bed and sofa was the door to the balcony on which there were two deck chairs and a table. Also the huge shower was beautiful – a remnant from the past when all cabins were equipped with a bathtub. 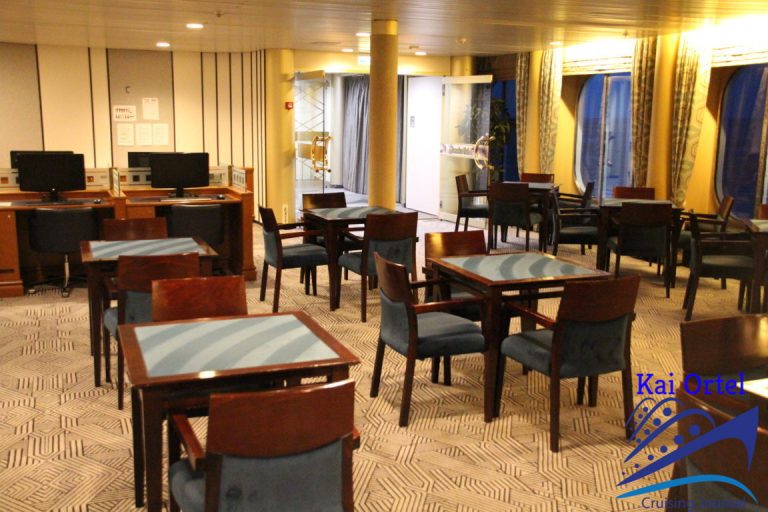 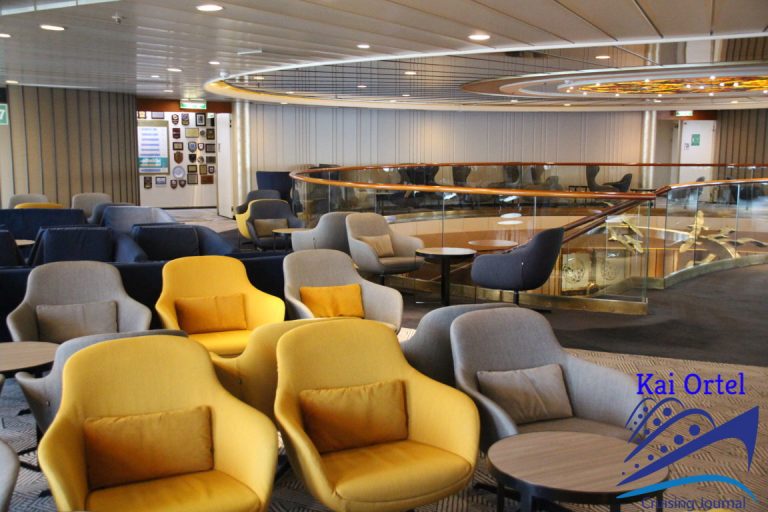 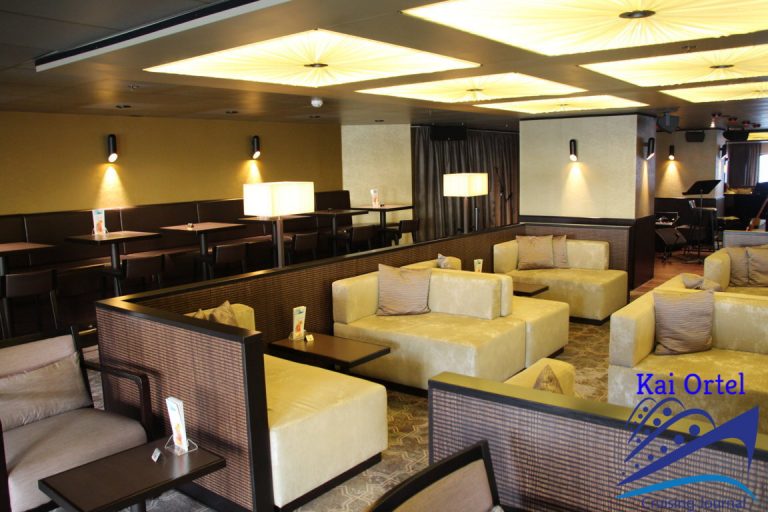 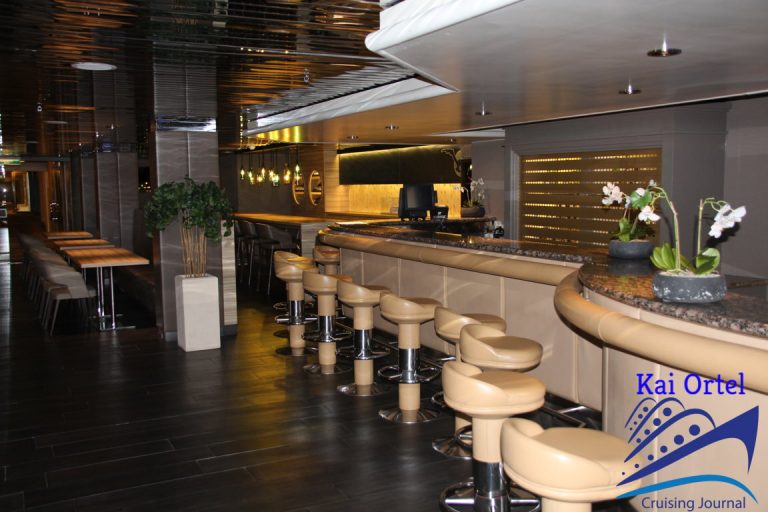 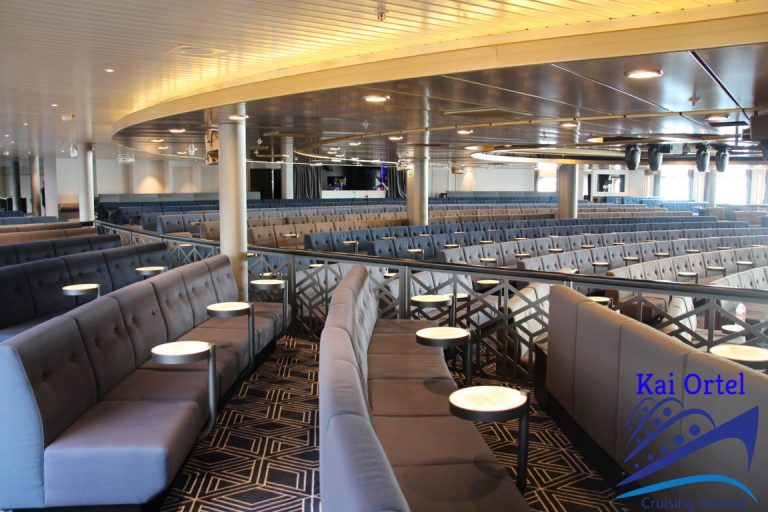 Dining onboard the Phoenix Reisen ships is wonderfully relaxed. There are no two separate seatings anymore, but only one long one, with a free choice of restaurants, tables and arrival times. The Artania Restaurant on deck 3 and the Vier Jahreszeiten Restaurant (Four Seasons) on deck 2 have a combined capacity of 900 seats, and the Lido Restaurant (buffet) offers space for another 280. (Artania’s total passenger capacity is for 1,260 guests.) If you wish to reserve a certain table, you can arrange this with the maitre d’, otherwise you come and go as you please. You could call it “German Freestyle Cruising”. In the evening, table wine is included in the cruise fare, while in the morning, I found breakfast in the Lido Restaurant fantastic. There were freshly baked rolls and freshly baked bread available each day and beside the usual tea and coffee, no less than four kinds of fruit juices were on offer.

Phoenix Reisen prides itself of offering cruises on smaller ships in a very familiar style. And the crew of the Artania really lives the company claim Willkommen an Bord – willkommen zu Hause (Welcome aboard – welcome at home), making you feel of being among friends rather than spending a sea holiday in an anonymous mass. Artania also features a very high number of repeat passengers, and thanks to the ship itself and its crew having made numerous TV appearances, everyone knows and greets everyone else onboard. This is helped by the fact that the onboard language is German and that those few passengers who are not from Germany, Austria or Switzerland understand German or should at least tolerate some habits uncommon on international ships (German “Schlager” music for instance, typical German food or the occasional “Frühschoppen”). It is also noteworthy that Phoenix Reisen is a bit old-fashioned in its tipping policy. There is no automatic debit from the onboard account, you receive various envelopes instead in which you put banknotes (for the restaurant crew, cabin steward, galley and others). 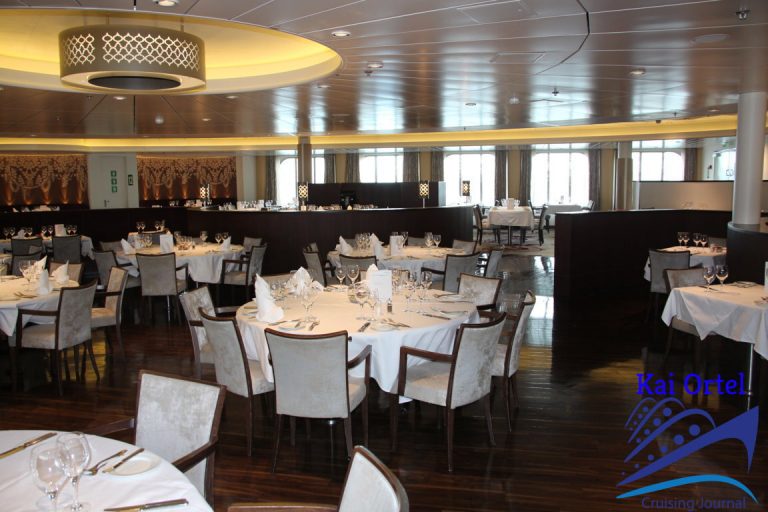 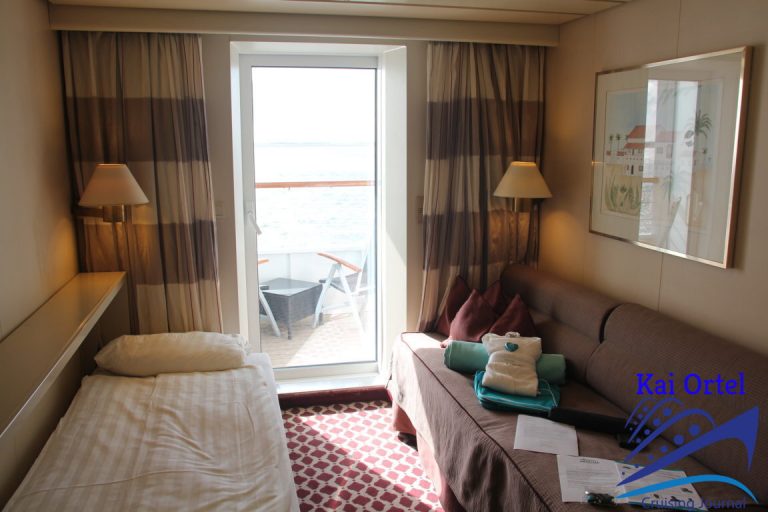 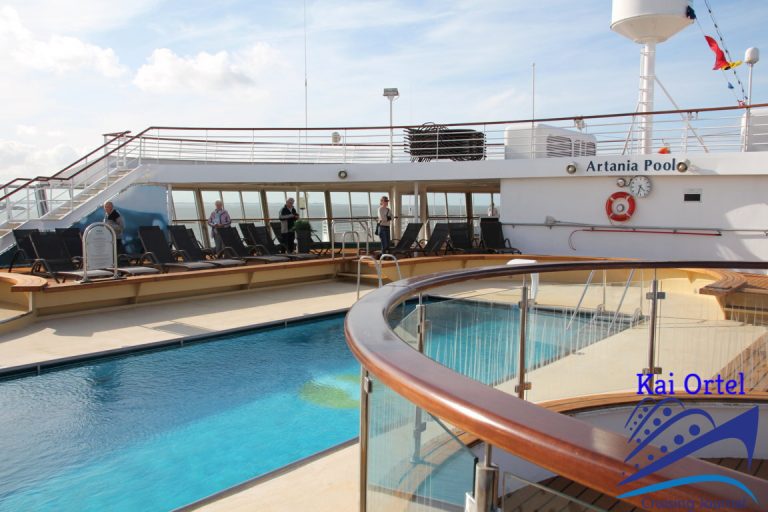 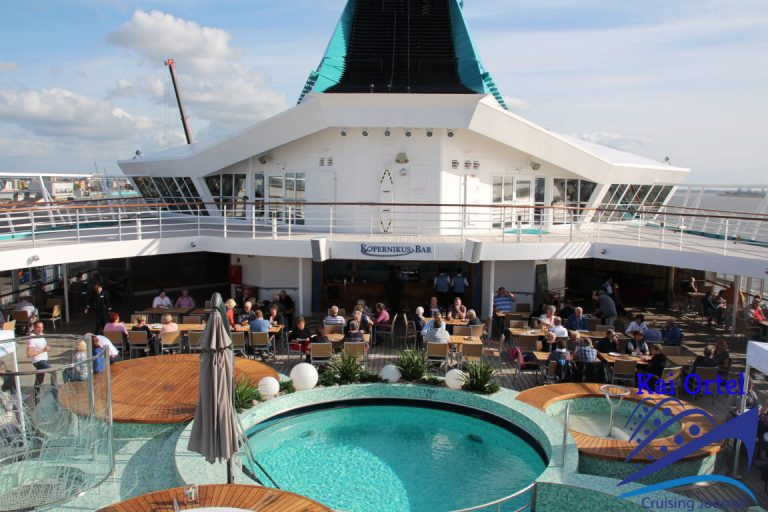 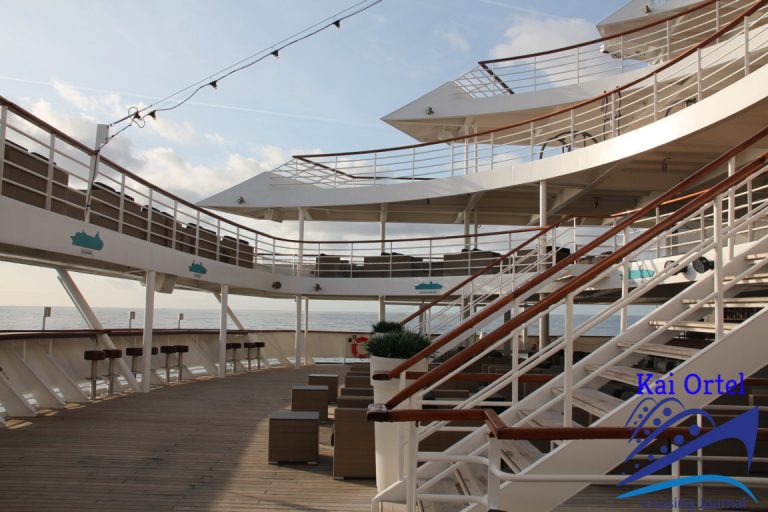 You usually don’t go on a Phoenix ship because of its sports and wellness opportunities, but nevertheless, Artania offers a number of respective facilities. There’s a beauty salon and hairdresser onboard as well as a fitness centre, sauna and spa. Furthermore, the ship features two swimming pools, although after the last rebuilding of the Kopernikus Bar area on deck 8, only the one on the forward part of her sun deck (deck 9) is suitable for some real swimming.

As for the onboard entertainment, there are no opulent production shows onboard, but the Atlantik Lounge can still host concerts and other evening entertainment. The cruise I took was marketed as a “Schlager-Kreuzfahrt” (German pop music cruise) and all three artists performing onboard (Peter Kraus, Vicky Leandros and Micky Krause) each filled the place easily and turned the venue into a most memorable night for everyone attending. Additionally, there is live music playing in the other onboard lounges too, most notably in Harry’s Bar, Casablanca Bar and Pazifik Lounge. You can also join the ever-popular bingo game or play cards in the Jamaica Club where lists are on display on which passengers could ask potential fellow passengers to join their parties.

When in port, Phoenix offered a fair number of organized excursions – five in Harwich (for London, Cambridge and Constable Country respectively) and four in Amsterdam (for Amsterdam, Volendam and Den Haag). I didn’t participate in any, but from what I heard, Phoenix Reisen’s philosophy of taking care of each passenger like it were a member of family also extends to the excursions. 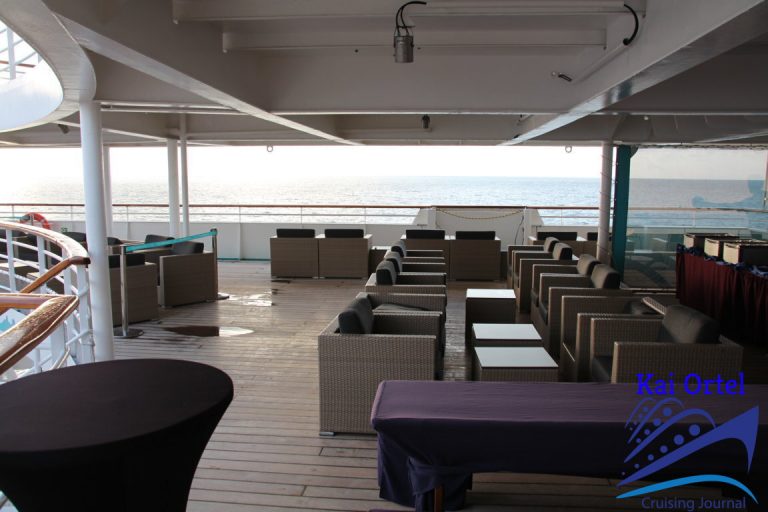 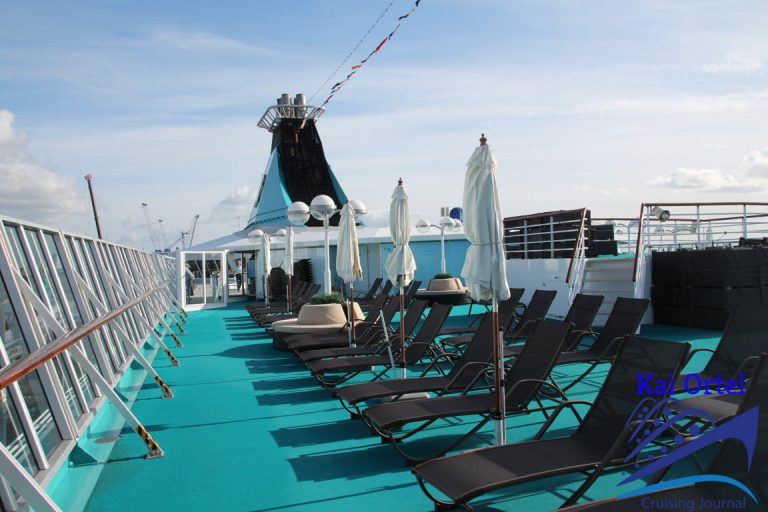 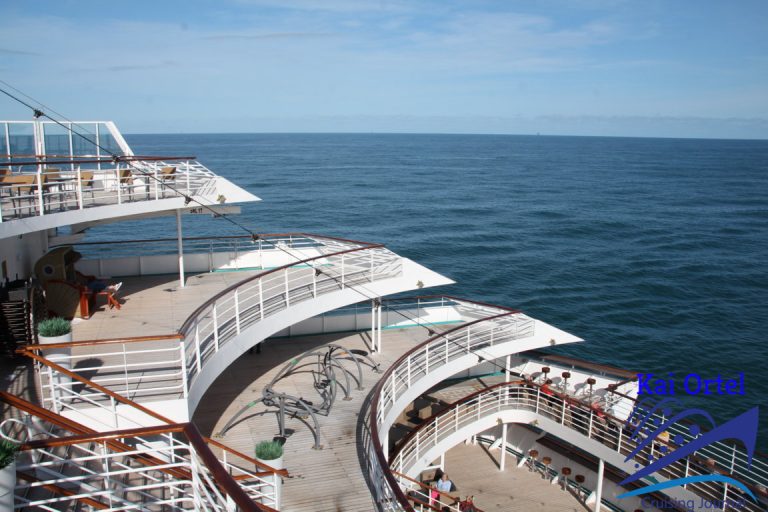 However, the Phoenix family is one with more or less two generations missing. At least I (45) found myself lowering the average age considerably on Artania. On that particular North Sea cruise, there was hardly anyone younger than 40 around, and at below 50, one still belonged to the “youngsters” onboard. That does not mean that families with children aren’t welcome onboard Artania, but for obvious reasons, families tend to opt for much larger ships with a wider array of dedicated facilities for children and teenagers. However, don’t expect everyone to wear gala attire or show off her (or his) jewellery all day and night. The Phoenix Reisen dress code is very casual, only on gala nights or special occasions, elegant clothing is recommended.

Artania is a ship you fall in love with immediately. Her lovingly furnished lounges and wide arcades inside find their resemblance on the outside decks where her passengers can enjoy vast open spaces that are unparalleled on today’s mega cruise ships. The Phoenix Reisen flagship on my cruise turned out to be a ship full of wonderful places, a fantastic crew and an interesting bunch of passengers from my home country. Artania is definitely not holding her exceptional position on the German cruise market by chance.

Look at all the Artania Reviews on Cruising Journal.