Viking Cruises to resume operations from May 2021

The Good News! Viking Ocean Restarts in May 2021! The Bad News: You have to live in the UK to sail on Viking’s newest Ship.

Viking, the multi award-winning Cruise Line, has announced that Viking Venus will embark on three special sailings along the coast of England.  The sailings on May 22nd, May 29th and June 5th, 2021 will set out from Portsmouth on Britain’s southern coast on 8-day itineraries.  “England’s Scenic Shores” will be the first to sail on Viking Venus, the sixth identical Viking Ocean ship, which will be delivered in April.  And in a sign of how much pent-up demand there is for cruising in the United Kingdom, pre-registration is currently limited to Viking’s past guests. Viking has extraordinary loyalty among past passengers but in due course, these voyages will be opened up to all UK residents. 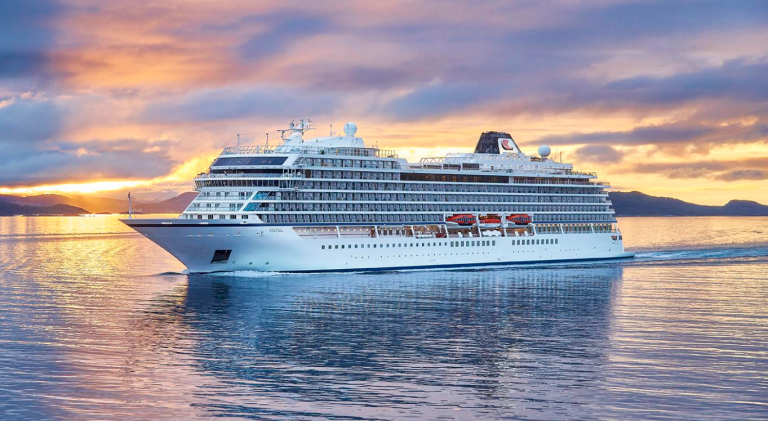 Viking, first to suspend operations at the beginning of the pandemic, first to resume.

As the British government recently signalled its permission to allow the resumption of domestic cruises, Viking sprang into action.  Viking’s indefatigable Founder and Chairman, Torstein Hagen said “We welcome the UK Government’s support for the return of safe, domestic cruises as an important component in the travel industry’s recovery. In recognition of this support, and to celebrate the fact that we have a British godmother—the esteemed broadcaster and journalist Anne Diamond—we have chosen to name our new ship, Viking Venus in the UK on May 17th.

Hagen continued “We are in a position to restart operations quickly and start sailing again in May because we have kept our ships crewed during warm lay-up throughout the past 12 months.  We have been implementing our additional protocols, including daily quick and easy non-invasive saliva PCR tests for our crew for almost six months now. With our new protocol enhancements in place, we believe there will be no safer way to travel the world than on a Viking voyage and we look forward to welcoming UK guests back on board very soon. 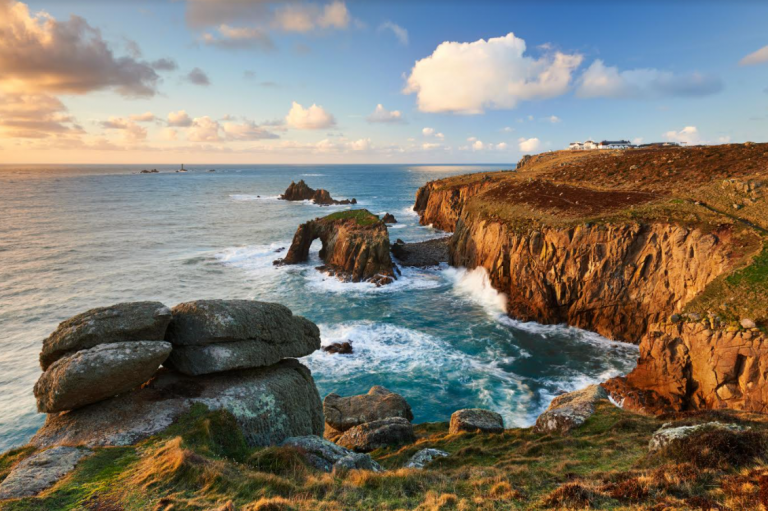 Viking Venus passengers will be the first to experience this ground-breaking program. Developed in concert with an international team of medical advisors, including Dr. Raquel C. Bono, Viking’s Chief Health Officer. Dr Bono is the perfect person to do so. Most recently she led Washington State’s medical and healthcare systems response to the Covid-19 pandemic. It is generally considered to be the most successful state in its handling of the pandemic. Dr. Bono is a board-certified trauma surgeon and retired Vice Admiral of the United States Navy Medical Corps.

The program Dr. Bono help construct for Viking consists of installing a full-scale scientific laboratory on every Viking Ocean ship. All guests and crew will receive daily quick and easy non-invasive saliva PCR tests. New air purification technology has been installed on all Viking ships, in addition to the independent air handling already a feature in every Viking stateroom. Additional health checks, sanitization and physical distancing measure will provide further protection for Viking guests and crew at all points of the journey. A complete overview of the Viking Health and Safety Program can be found at: www.viking.com/health-safety. Unfortunately, at press time, all other previously scheduled Viking sailings through May 31, 2021 remain cancelled. For more information on Viking, go to www.viking.com 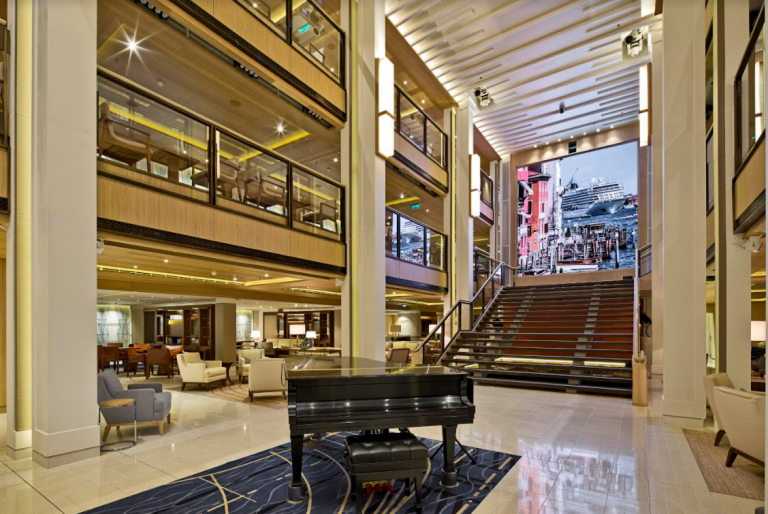 Viking Ocean-Going fleet has consistently been rated as “World’s Best Cruise” line in Travel+Leisure, and Conde Nast Traveler magazines from its very start. Cruise Critic, arguably the most important resource for Cruisers, has rated the ships as “Best Overall” Small to Mid-size ships in its Cruiser’s Choice Awards. With the arrival of Viking Venus, Its fleet of identical pristine white ships now numbers six.  At 47,800 tons, its 465 staterooms all feature private balconies. And what staterooms they are. The smallest is a generous 270 square feet.  All five categories feature sweeping views, king-sized beds, generous closets, large interactive flat screen Televisions with movies on demand, bathrooms with large showers and heated floors.  The top-of-the line Explorer suites range from 757 to 1163 square feet.  These spacious two-room accommodations offer wraparound private verandas and a host of amenities and privileges. 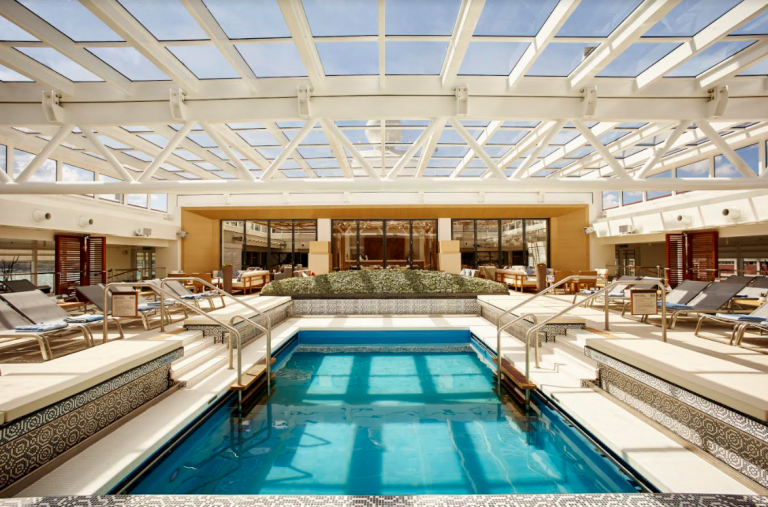 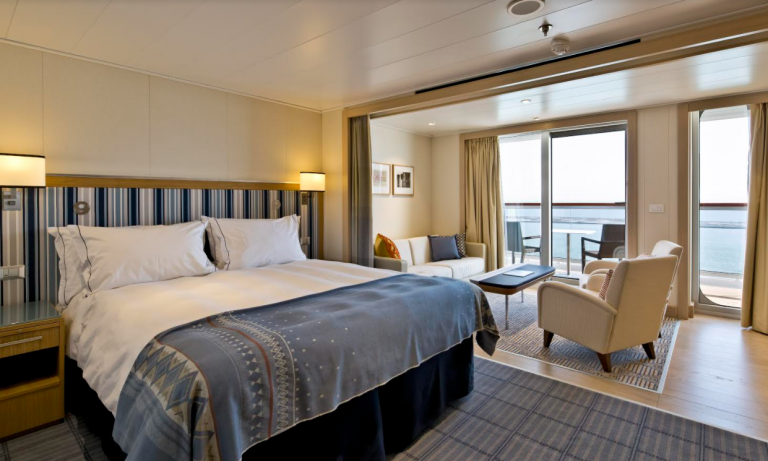 Viking’s recipe for success: What Viking Venus does not have is almost as exciting what she does.

You won’t find a Casino aboard.  Nor will you find a child under 18.  You won’t pay an upcharge to dine in any one of the eight dining options on offer.  The LivNordic Spa is open to everyone with charges only for personal services. WiFi is free and available virtually everywhere on board including in the free laundry rooms on every deck.  There’s no charge for 24-hour room service. In short, Viking is about all-inclusive as it gets. 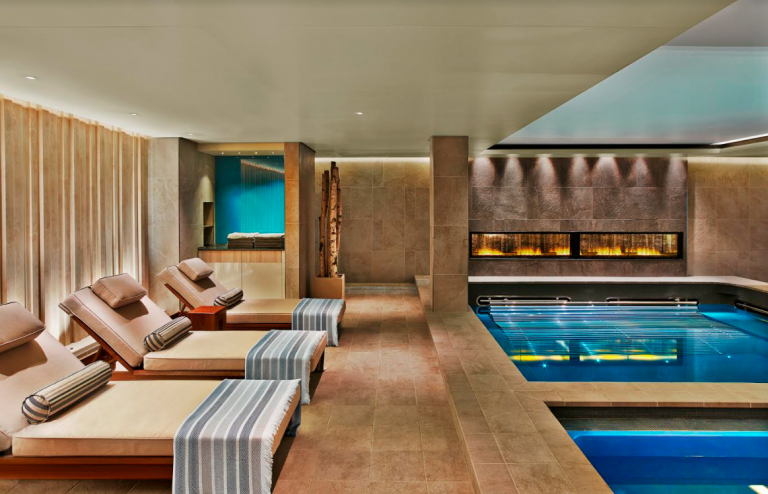 The ship itself is light-filled oasis at Sea

From the two-story Explorers’ Lounge to the floor-to-ceiling window in The Restaurant, Viking’s Ocean-going ships are masterworks of Scandinavian design. Light wood grains, touches of slate and teak, Swedish limestone and fragrant juniper abound.  What may come as a surprise is how intimate Viking Venus will feel.  There are corners of the ship designed for quiet conversation. Even the Open-seating Restaurant is divided into a series of smaller ‘rooms’. The glorious Wintergarden, site of spectacular daily afternoon teas, is elegant space of total serenity. The neighboring Main Pool, one of two, has a retractable roof that ensures any-season swimming in sunshine or not. 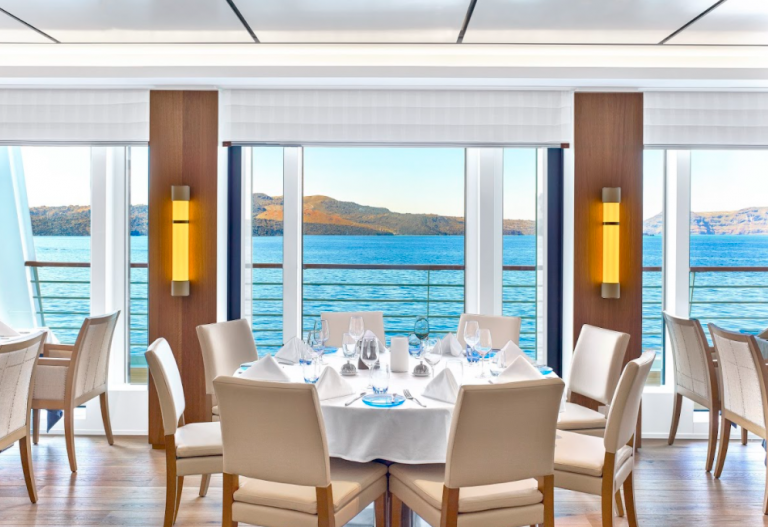 The Dining Options include the finest Restaurants at Sea.

Executive Chef Anthony Mauboussin oversees every single item cooked aboard every one of Viking’s ships.  Working from his home kitchen in Chamonix, France, Mauboussin is continually developing recipes that represent each and every destination Viking Venus will visit. Imagine what a French chef’s take will be on British cuisine!  An appetizer, a main course and a dessert will be created. So that every day of the voyage, passengers will be able to “taste” their destinations with authentic dishes served daily in The Restaurant. Meanwhile, Scandinavian flavors are found at breakfast and lunch at Mamsen’s the ship’s gourmet deli. Manfredi’s devotes itself to Italian favorites. The Chef’s Table has rotating tasting menus and wine pairings. The World Café is at the top of the ship with an extensive international menu and the most al fresco dining at sea.  And 24-hour room service means you will never go hungry on Venus.

For more information, go to www.viking.com. Do not miss News, Reports and Reviews of Viking Cruises on Cruising Journal, with pictures, opinions and offers.