The Gemini had been built in Spain in 1992 as the Crown Jewel for Crown Cruise Line, an American subsidiary of the Swedish-Finnish EffJohn Group. She started her career in the Caribbean before heading for Far Eastern waters in 1995 as the Superstar Gemini, sailing for Star Cruises. These cruises lasted for 14 years when she began charter work in Southern Europe from 2009 onwards under various names. Renamed Gemini and now owned by the Danish Clipper Group, she was also used as an accommodation ship recently before finding a new home in the Aegean when Celestyal Cruises chartered her in 2016 as the Celestyal Nefeli. In 2018, her operator changed to Etstur.

Renamed back into Gemini, she remains in Greek and Turkish waters during the summer months (May – September), sailing on 3- and 4-day itineraries starting and ending in the Turkish Aegean port of Çeşme. Her ports of call usually include Mykonos, Santorini, Syros, Piraeus and/or Rhodes, although the order and selection can vary. In the off-season, the vessel continues to serve roles as an accommodation ship whenever an opportunity arises.

The 19.903 GT Gemini has eight decks with the main passenger deck being deck 5. Below and above it are two decks each with cabins. In total, the ship has 400 cabins in eleven categories: 123 inside cabins, 277 outside cabins and 10 suites with balcony. All cabins are fitted with shower and toilet, air-conditioning, telephone, hairdryer, safe and TV. 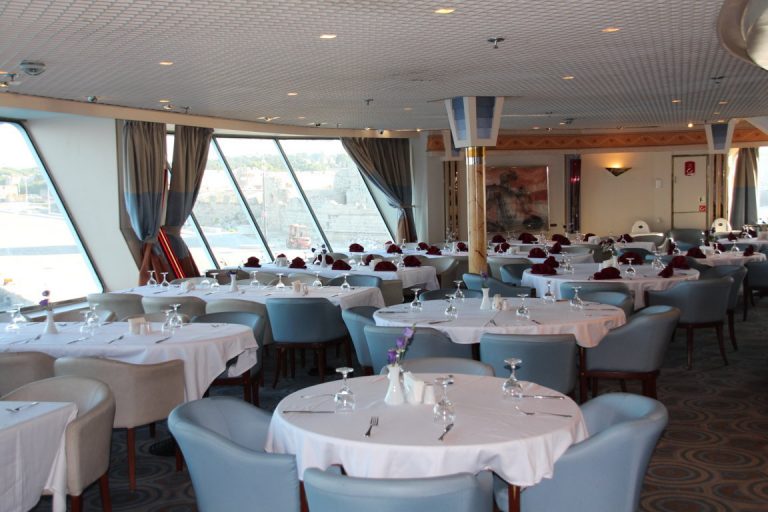 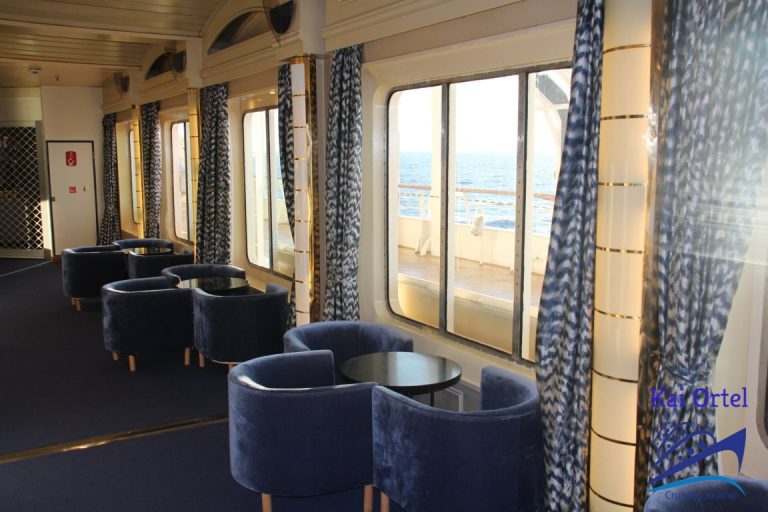 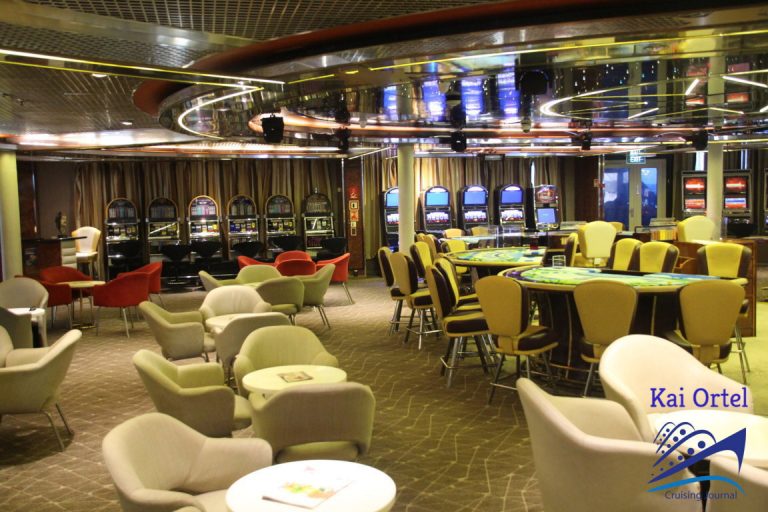 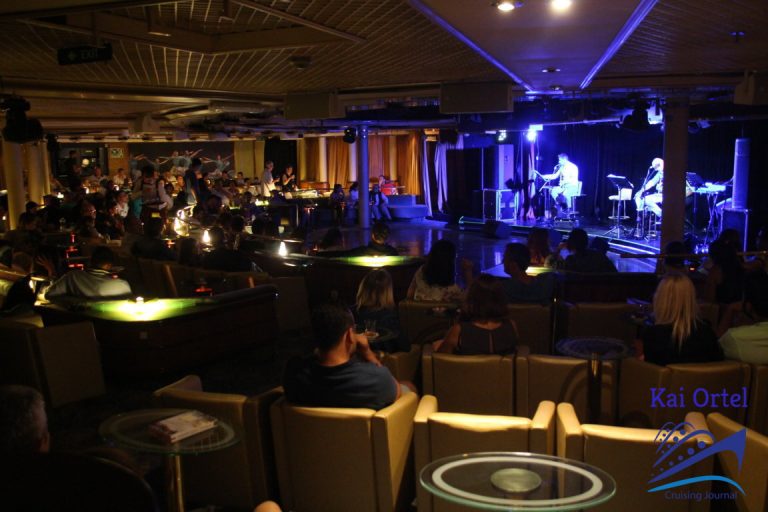 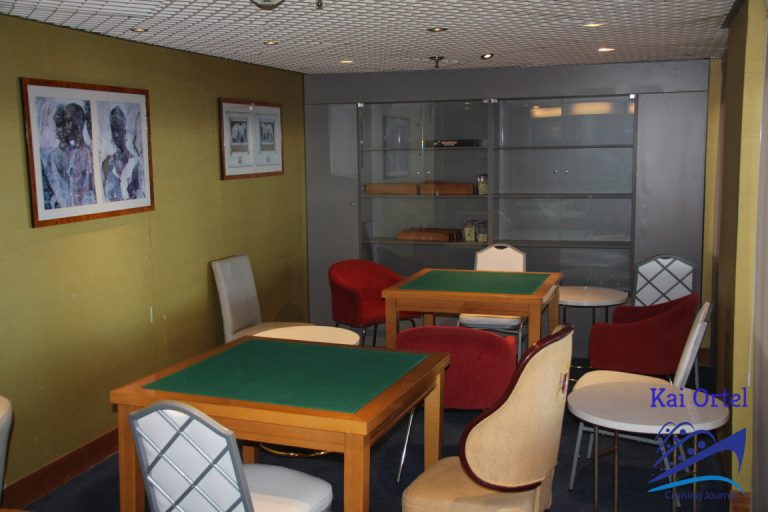 There are two restaurants on board – the elegant Aegean Restaurant aft on deck 4 and the buffet-style Leda Restaurant aft on deck 6. The latter with its red and white chequered tablecloths is a bit reminiscent of a Bavarian beer tent and is used for “casual dining”. However, the former is no real a la carte option either, only the buffets on display offer a bigger variety than upstairs. On the other hand, the Leda Restaurant features an adjacent outside deck so it’s ideal for breakfast or lunch under the Aegean sun. At busy times, the Eclipse Lounge on deck 7 is also being used to serve dinner or private functions.

The hotel and restaurant crew onboard the Gemini is being provided by Miray International, a Turkish firm specializing in ship management. Most of the crew members just like Etstur’s passengers come from Turkey and speak Turkish, but like on most international cruise ships, English is no problem for them either. (And once your cabin steward has found out that you don’t speak Turkish, you’ll get an English language daily program instead of the usual Turkish one, too.) The Gemini’s mostly Greek and Eastern European officers and deck crew come from Cruise Management International (CMI) in Miami.

With a capacity for 960 passengers, the Gemini is a relatively small ship, so her sports and wellness facilities are limited. But there’s a gym on deck 8 forward, just next to the ship’s beauty centre and a room with a sauna and massage treatments. Her only outdoor pool amidships on deck 8 is not outright tiny, but with a dozen or so people in it, it gets crowded quickly. Two jacuzzis are attached to it. 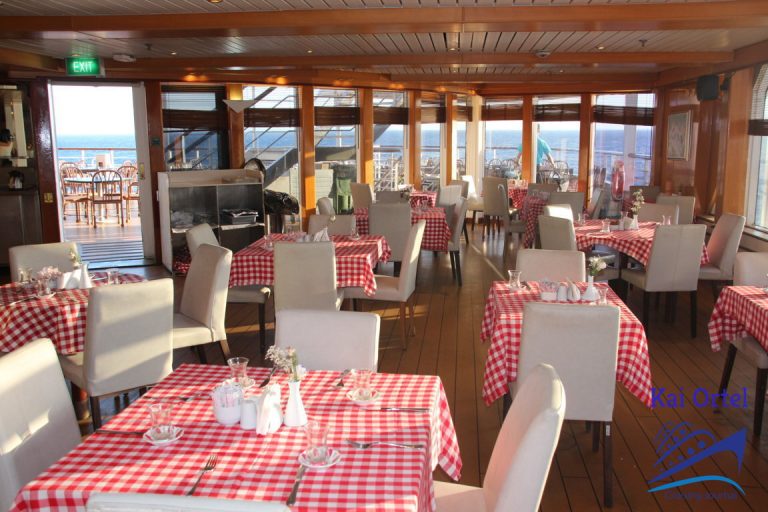 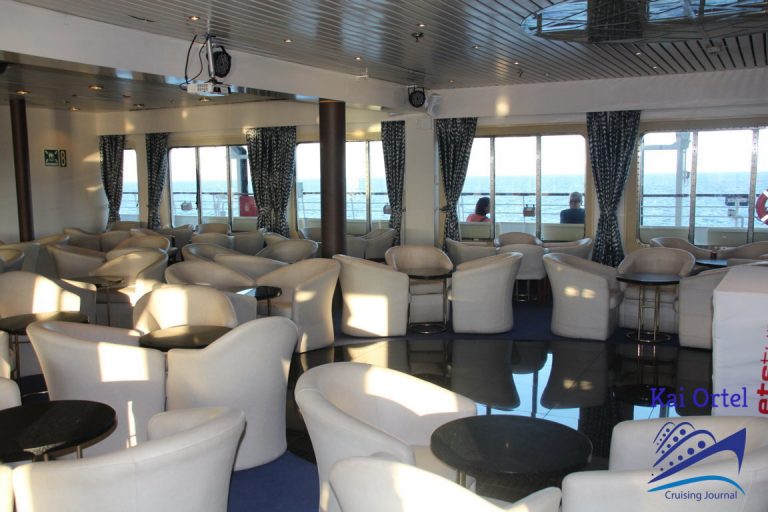 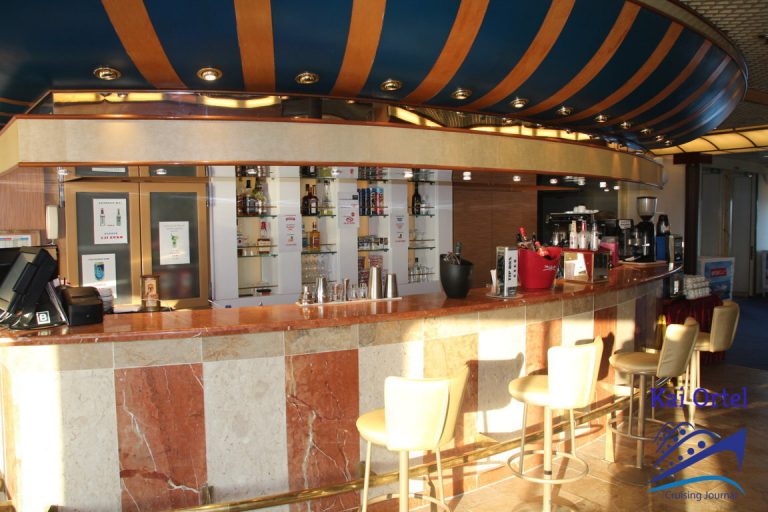 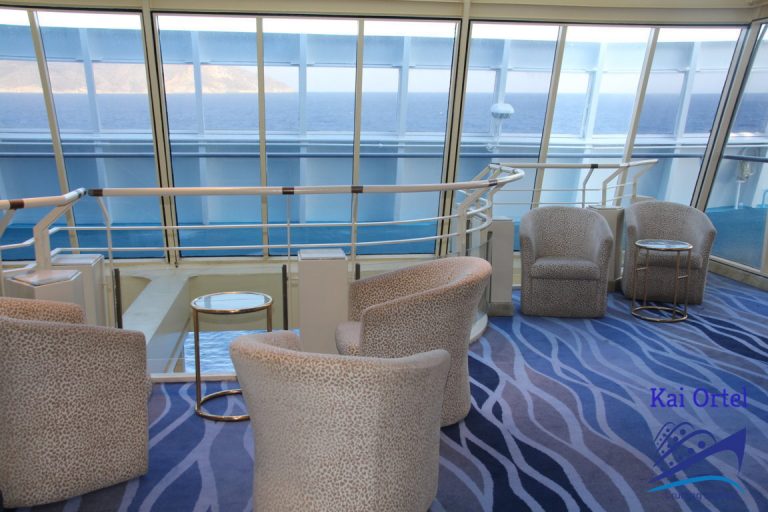 Onboard life on the Gemini concentrates on the Selene Bar aft on deck 5 (in fact a somewhat strange combination of casino, bar and lounge), the beautiful and bright Eros Lounge further amidships and the Muses Show Lounge in the forward part of the same deck. Especially during the evenings, both the Muses Show Lounge and the Eros Lounge vibrate with folklore and music, although the style is not as oriental as one would expect on a Turkish ship. In addition to that, the Eclipse Lounge on deck 7 serves as a disco from time to time. The whole ship nowadays is decorated with nice motifs from ancient Greek architecture and mythology, the photos and artwork having been introduced during the vessel’s latest refurbishment in early 2016.

Etstur in each port of call offers excursions tailor-made to its Turkish core clientele, but the language barrier may keep international guests from participating in those. However, both the Greek islands and the Piraeus/Athens area can easily be discovered individually by public transport, taxi or hired car, so there’s no real need for organized excursions on the Gemini’s Aegean itineraries anyhow. 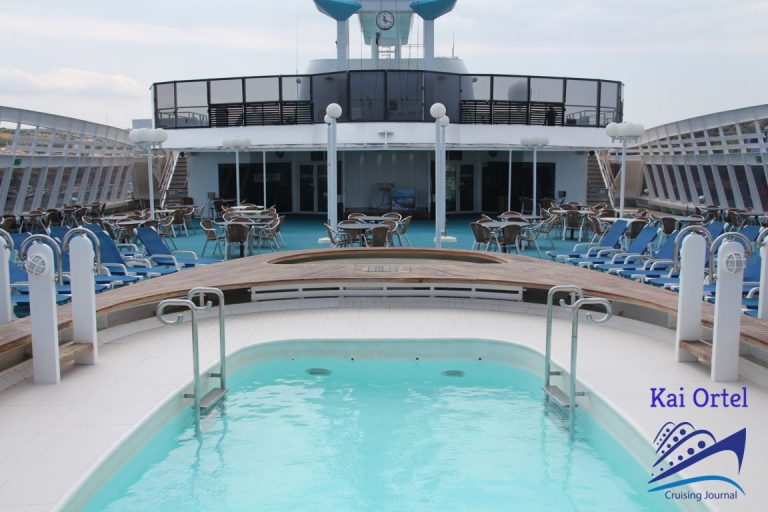 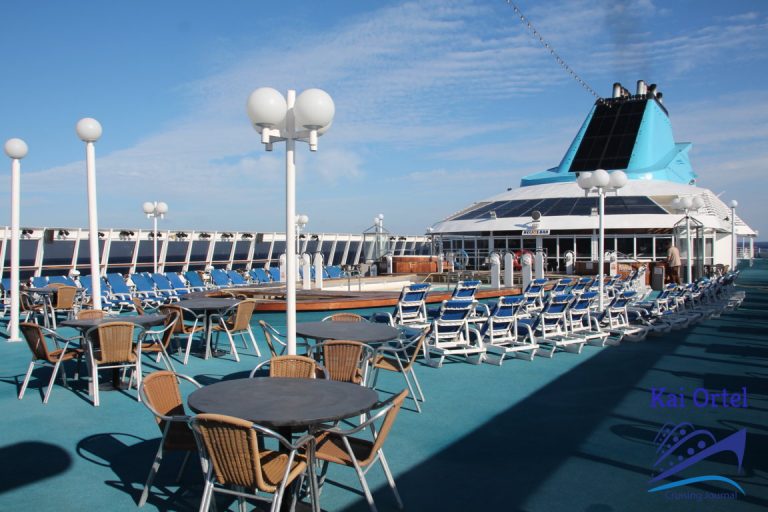 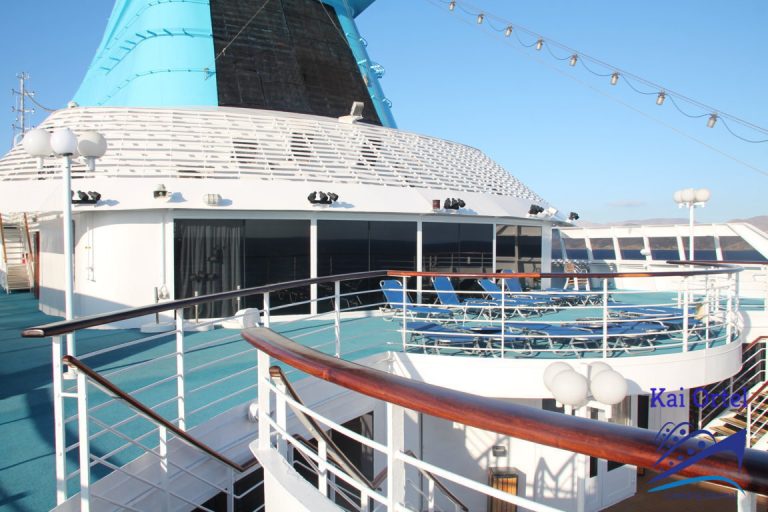 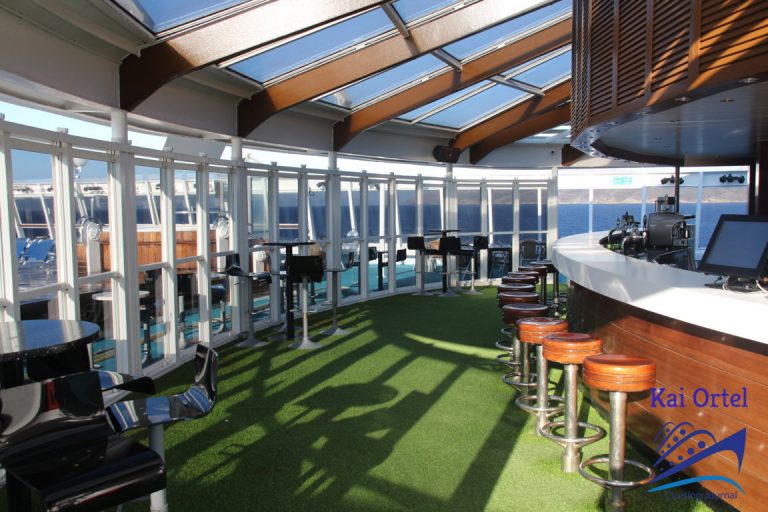 The vast majority of the Gemini’s passengers, as mentioned, are Turkish. But the Istanbul-based company nevertheless has an international hotline, so it’s not impossible to book a cruise as a foreigner. On the sailing I did, there were also a few Germans onboard, and I think I heard a few Greek and Latin voices as well. Onboard currency, by the way, is Euro – you can’t earn much by selling anything in Turkish Lira these days.

Etstur’s cruising philosophy is one of a very relaxed short holiday at sea which includes a most easy-going onboard atmosphere. There are no gala evenings or captain’s dinners onboard, so the dress code is very casual, too. But headscarves? hijabs? No way. The Gemini under Etstur flag represents a modern and cosmopolitan Turkey, her female passengers in fact wearing destroyed jeans, tight dresses and miniskirts in large numbers. One also gets the impression that the passengers and crew form a big family, many loyal Etstur guests having travelled with the Gemini’s predecessors Aegean Queen, Delphin and Aegean Paradise before. 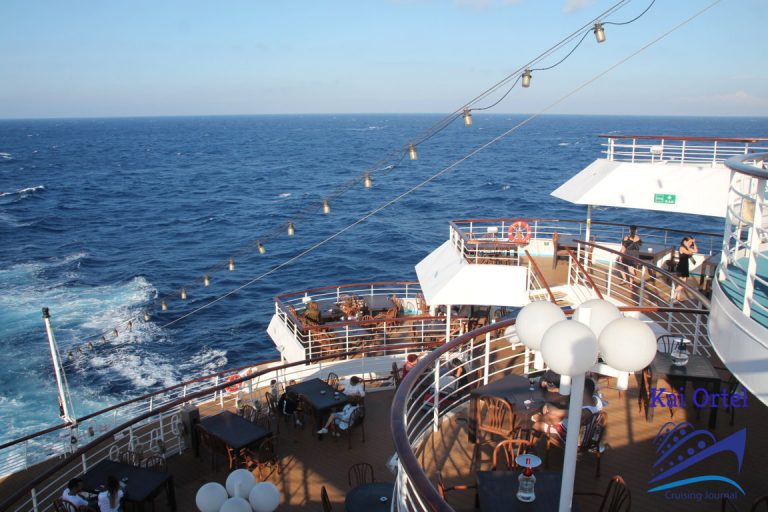 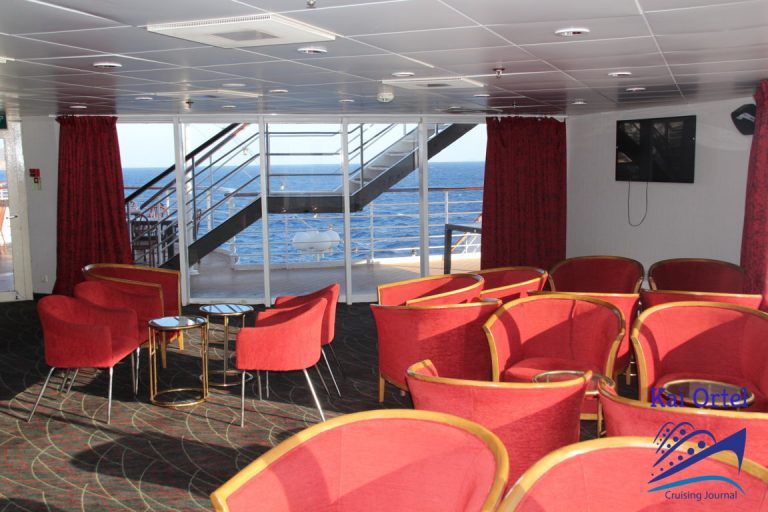 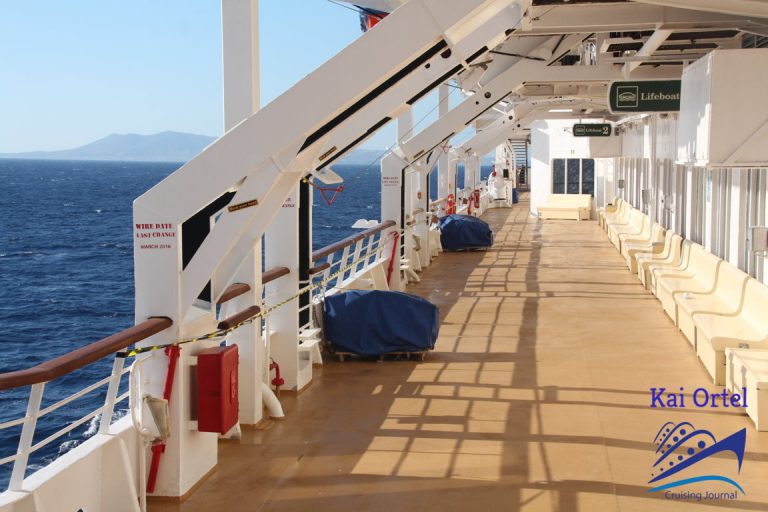 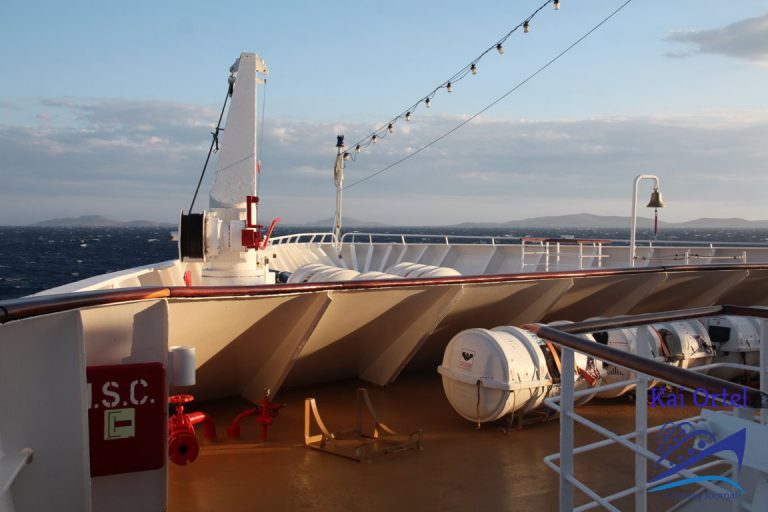 Clipper Group and Etstur have every reason to be proud of the little Gemini, a true jewel of a ship. At only 163 meters, she may not be big, but on her outside decks alone, there is more space than on many of today’s mega cruise ships. On the bridge top deck for instance, passengers can enjoy a wonderful view in the direction of sailing. And this is by far not the only place on the outside decks where you can spend undisturbed minutes in the fresh sea breeze. At the stern, the decks are terraced so that they form a small amphitheatre (with the sea as a stage) while her boat deck is so wide that it would do honour to an old Atlantic liner. The boat deck also is wraparound and gives its passengers access to the forecastle. There are not many cruise ships of her “pocket” size around anymore, and normally, a vessel as familiar and intimate as the Gemini comes at a premium. So personally, I wouldn’t mind at all coming back to the former Crown Jewel, Superstar Gemini and Celestyal Nefeli soon.

Do not forget to do your own Reviews on Cruising Journal!