The Sky Princess is the fourth ship in the Princess Cruises’ Royal class. Built in the Fincantieri shipyard in Monfalcone, it differs from the prototype of its series because of several modifications, both structural and internal, specifically requested by the company.

First of all, the ship is equipped with an additional half deck on the bow that increased the number of cabins available. Then, there is the addition of the panoramic “Sky Suites” built on the superstructure at the center of the ship with 270° views from the balconies. These balconies allow guests the possibility of directly viewing the projection of the “Movies under the stars” on the large movie screen. With these changes, the passenger cabins went from 1,780 on the prototype, to being 1,834 on the Sky Princess. The last significant structural change was the choice to not include the characteristic panoramic glass “Skywalk” which is featured on other ships of this class. The “Skywalk” on the other ships was located on right side of the Lido deck, while on the left side there was the “Skywalk bar” which has also been eliminated on this ship. In the place of these two elements there are instead windows that allow for a sea view below. The gross tonnage of this ship is 145.281 tons, compared to the 142.714 tons of the Royal Princess. This makes the Sky Princess the heaviest ship in the history of Princess Cruises. 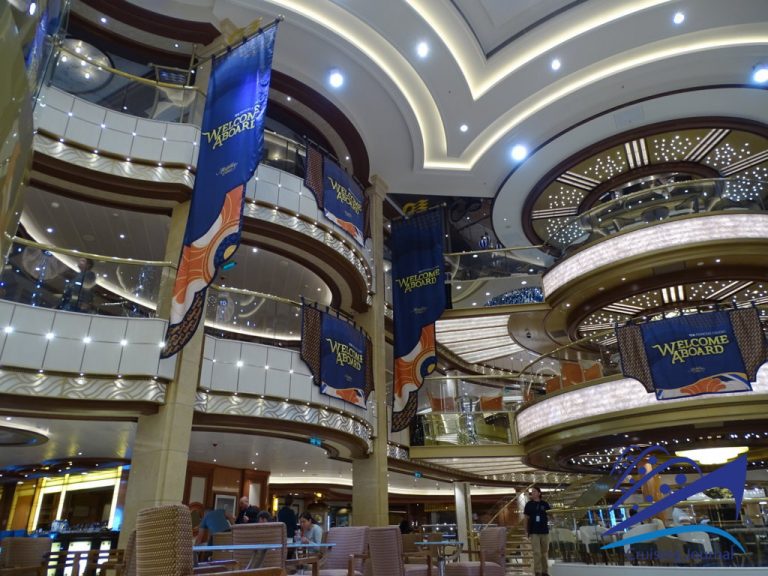 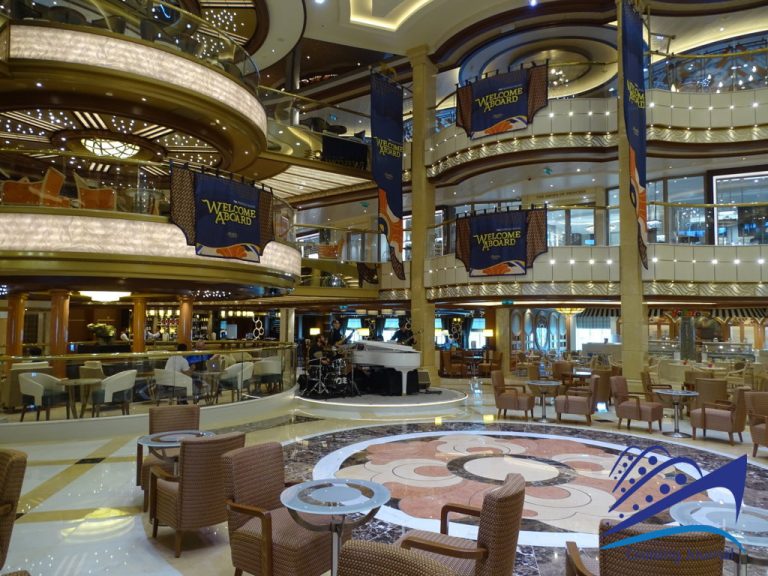 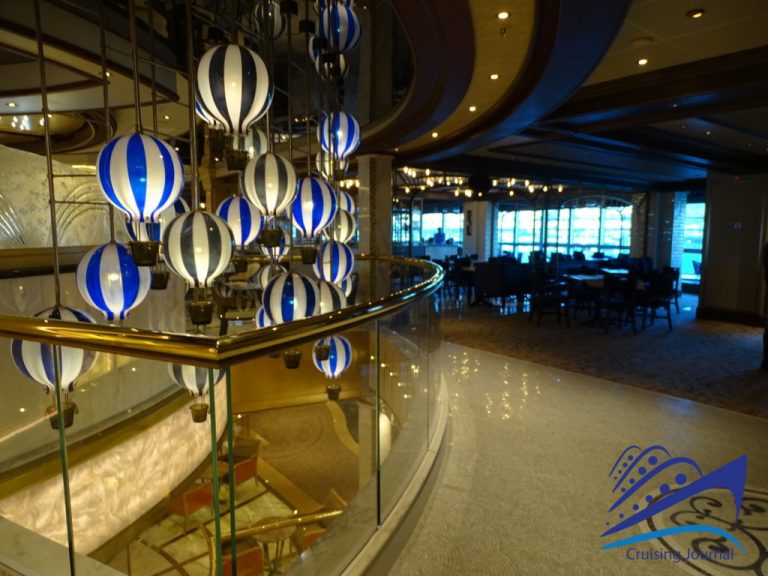 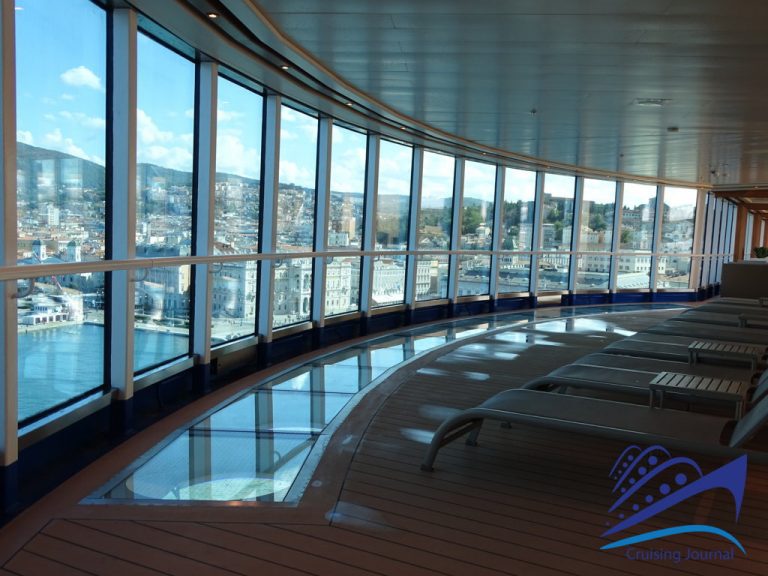 The hotel areas have also undergone several changes. The following areas have been modified: Alfredo’s Pizzeria (deck 7), Sabatini’s Trattoria (deck 5 – here on the Majestic Princess there was a Cantonese restaurant), Take Five (deck 6 – on the first ship of the series there was a dance club, on the “Majestic” there was the casino VIP room instead), Vista Lounge (deck 7), Camp Discovery (deck 17), The Sanctuary (deck 18). Furthermore, on the central Lido deck a second swimming pool has been added and a water park platform removed.

The dimensions have remained the same at 330 meters length and 38,4 meters width. The electricity generation is done by two Wärtsilä diesel motors, 12V46F and 2 14V46F, for a total power of 62,400 kw. The propulsion is instead guaranteed by two SAM Electronics 18 MW electric motors that allow the ship to reach a maximum speed of 23 knots (approximately 42 km/h). It is able to accommodate up to 4,610 guests on board (including third and fourth beds), while the crew can be up to a maximum of 1,411 people. 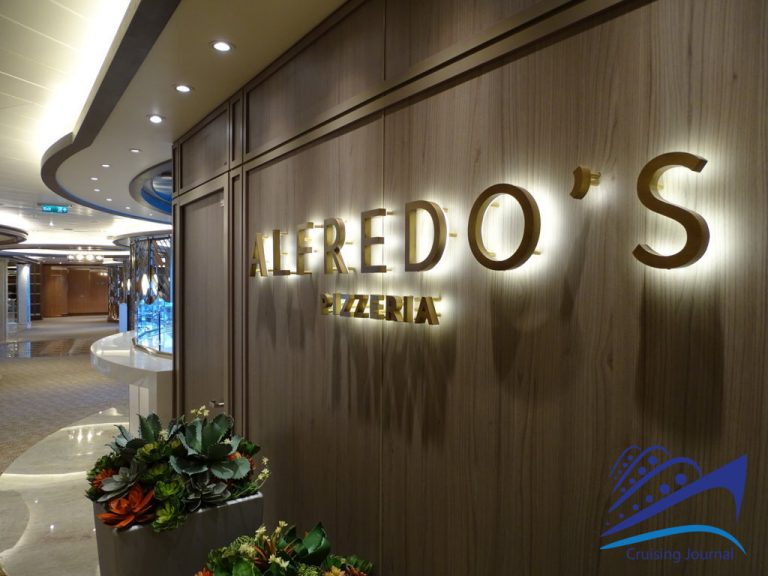 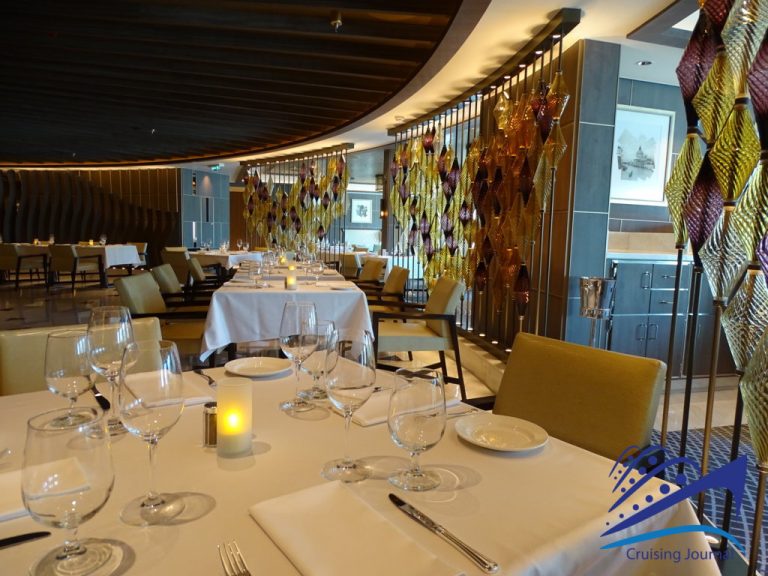 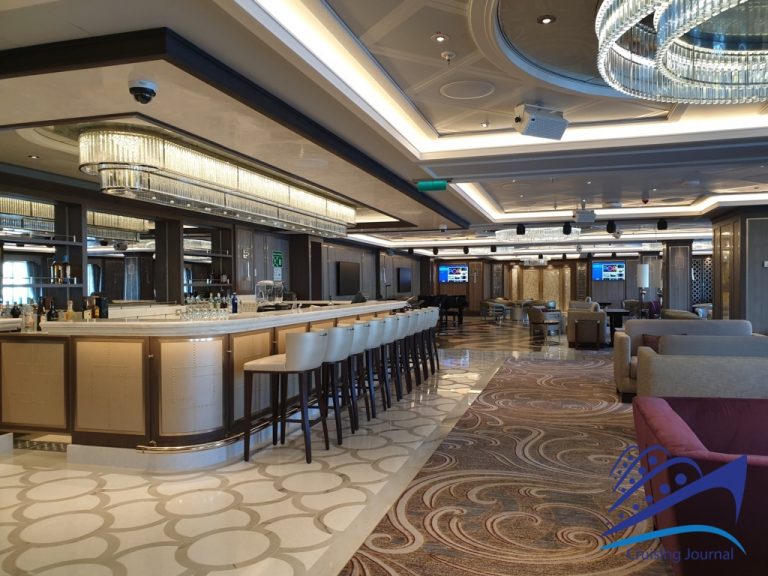 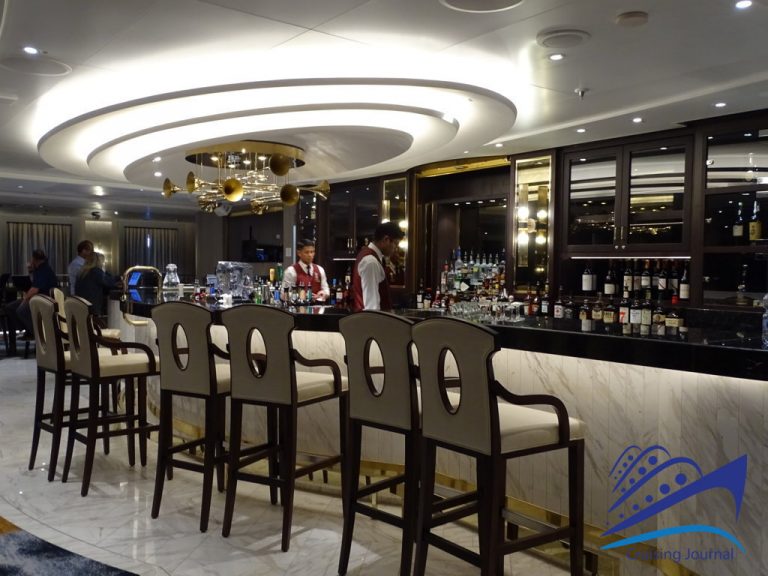 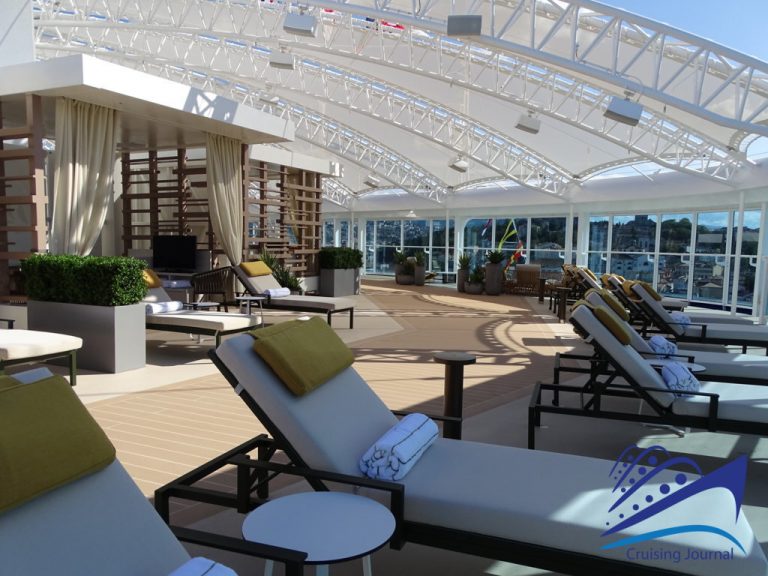 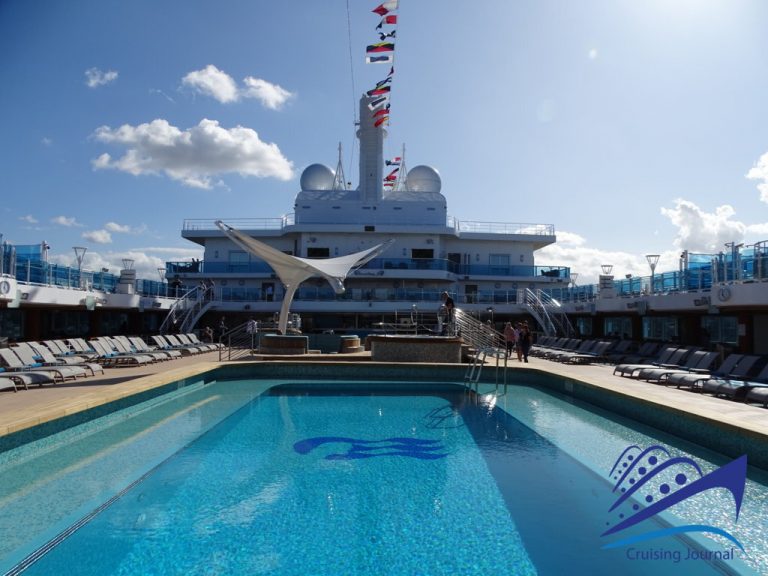 The most important feature of this ship by Princess Cruises is, in general, the excellent quality of the services offered on board. Being a premium brand, both the gastronomy and the entertainment are of the highest level.

The price of the cruise includes different restaurant options at no additional charge. Here we will mention a few: the most important restaurant is the grand buffet on deck 16 that is open from 5:30 am until 11 pm continuously, with a rotation of foods available during the course of the day. There are traditional Italian pasta dishes as well as meat and fish of the best quality, without forgetting the ethnic “islands” that are able to satisfy food lovers from around the world. A special mention needs to be made for the enormous selection of desserts that most likely is not equaled by any other cruise line. Also here, there are free soft drinks, including the delicious lemonade. Around the central swimming pool you will find a gelato stand, one with pizza by the slice, and a stand with hamburgers and French fries that are available for most of the day.

Guests can also enjoy the sweets and sandwiches at the atrium bar open 24 hours a day. Staying in the heart of the ship, we find a additional two culinary options: the French restaurant and the pizzeria “Alfredo” (that is included, only drinks are extra). Open from lunch until late evening, this last restaurant allows you to try a large number of high quality pizzas as well as a selection of Italian dishes. Finally, at your disposal are three main restaurants and guests are given the possibility to dine in the evening during two main sittings or if preferred a table can be reserved at the time desired. Two options for dining for an additional fee include: the Steakhouse and the Sushi Corner. 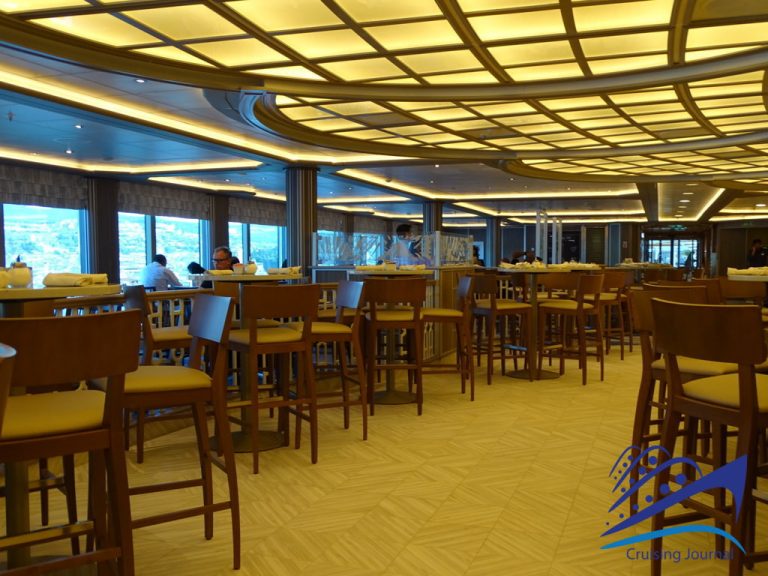 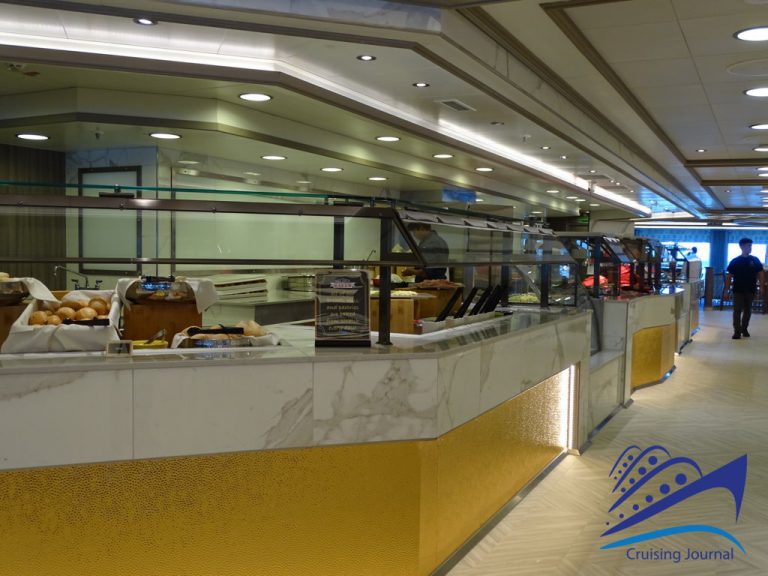 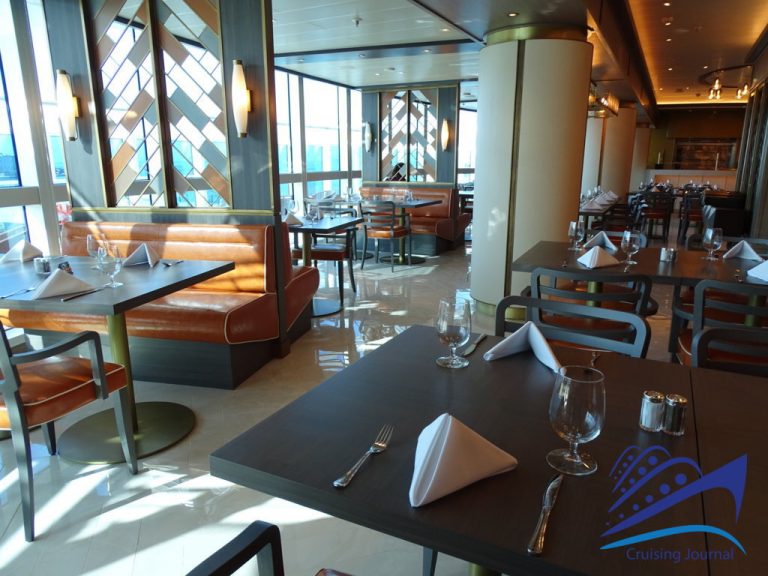 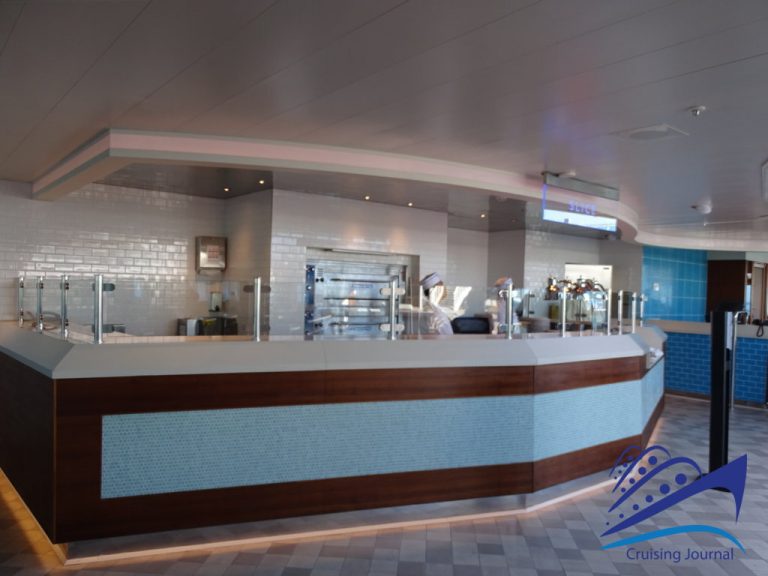 The entertainment merits a special mention as well. The theater shows are very engaging and the musical numbers always include a live band. Furthermore, in the atrium, in the other lounges and poolside, there are many different musical performances, all live, for lovers of every type of music.

Sky Princess will be engaged during the fall for the brief European season with departures from Civitavecchia, Barcelona and Piraeus. Subsequently it will depart for a transfer to Florida where, from its home port of Fort Lauderdale, it will depart for classic cruises through the Caribbean all winter long. Instead, for 2020 a full season awaits the ship in the Baltic Sea with departures from Copenhagen and Warnemünde. 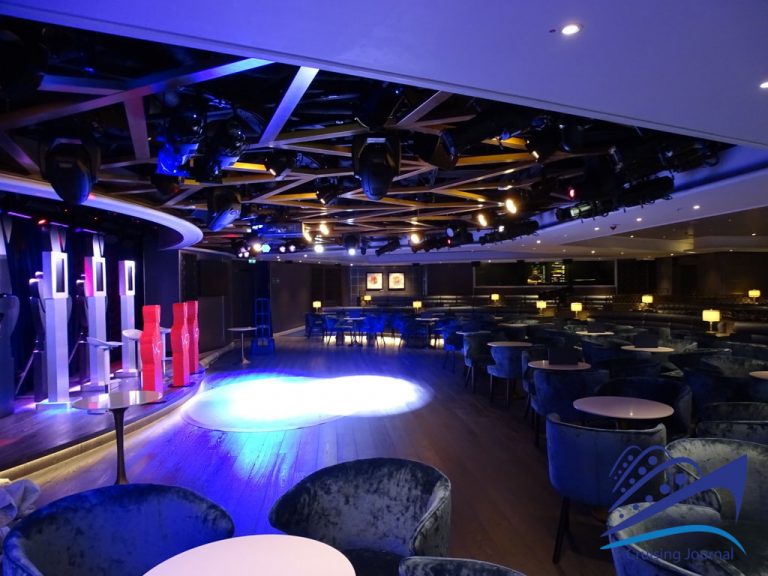 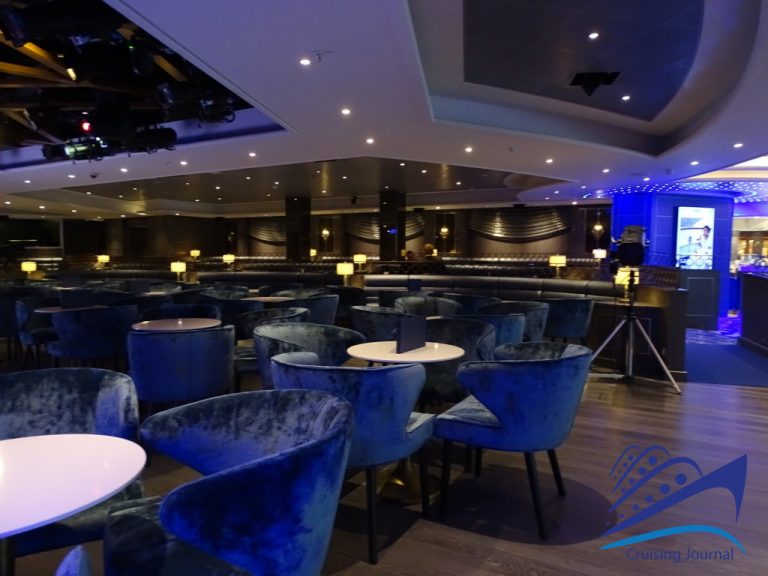 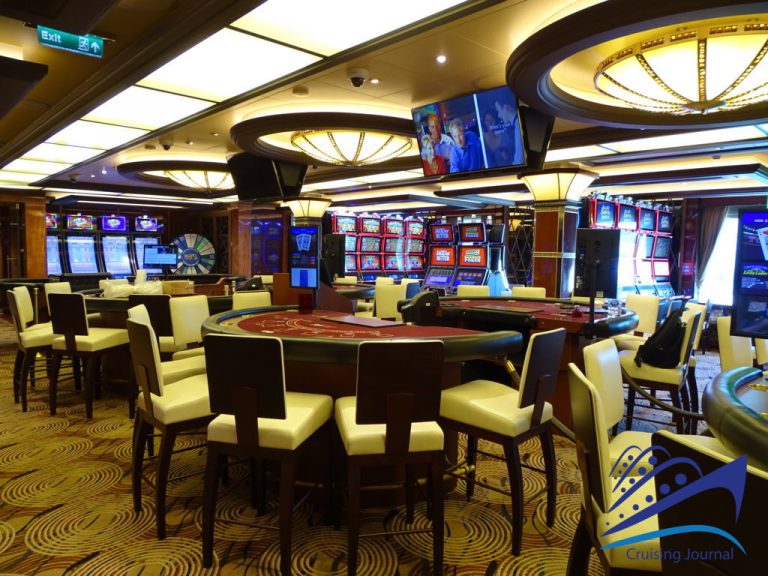 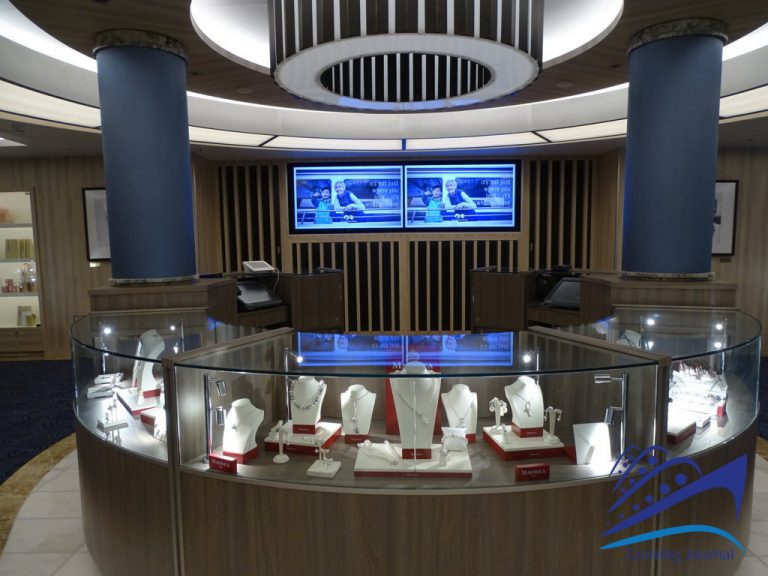 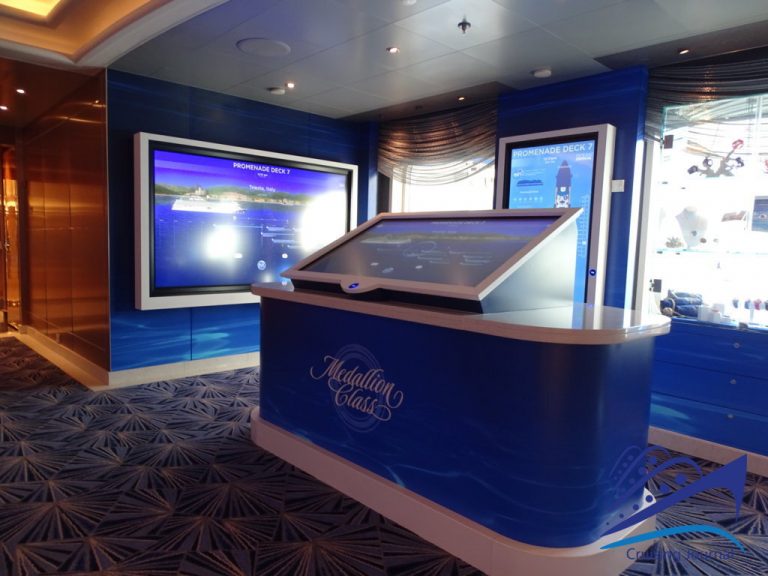 In conclusion, we would like to remind our readers that “Sky” is the first ship to be inaugurated with the Ocean Medallion technology onboard, that substitutes the traditional room card, making the services available onboard into an interactive experience.

Don’t miss out on all the Reviews of the Sky Princess with advice, options and information, the Photo Gallery and the Video on Cruising Journal.