At 140,600 tons, Celebrity Beyond is the largest ship the “Modern Luxury” cruise line has ever sailed. And while Beyond looks like her sister ships Celebrity Edge and Celebrity Apex, she builds on their success. At 1073 feet in length, she’s been expanded to carry 3,260 guests in 1646 staterooms and suites.

She kept the most popular and eye-catching feature of them all—The Magic Carpet that is cantilevered off her port side. But Beyond gained an extra deck and added restaurants, bars and lounges that now number 32. And while she’s Celebrity’s largest ship ever, she is only the 65th largest ship in the world and practically intimate compared to much of the competition. 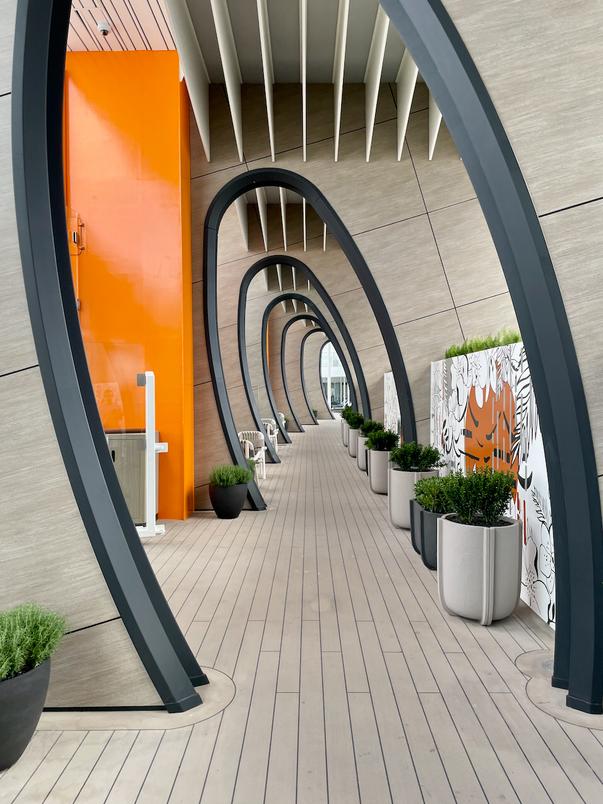 Celebrity Beyond expands its Suite Offerings and The Retreat

The extraordinary popularity of its ‘ship within a ship’ accommodations atop the ship
means these suites are often the first to be booked. So under the continued guidance of British designer, Kelly Hoppen CBE, The Retreat. as it is called, has been enlarged. 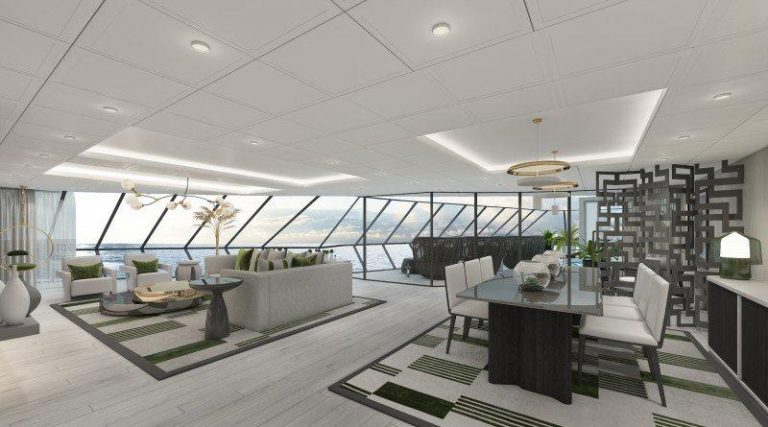 Iconic Suite on Beyond

It’s now two stories for sunning and swimming and simply relaxing. All suite guests enjoy extra luxury, services and amenities. But nothing can be compared to the two Iconic Suites. They’re the largest suites in Celebrity’s entire fleet. They offer 2500 square feet of pure luxury—almost 1900 square feet indoors and another 689 square feet of terrace. Perched over the bow, they have a view that rivals the Captain’s Own. With their own private hot tub, there’s practically no reason to ever leave your suite. But then you’d miss all the goings-on all over Beyond.

Step out onto the Resort Deck

This glorious space truly understands why so many people love to cruise. Not only does it include two swimming pools, but there’s also a living garden and two additional float pools that are cantilevered over the ocean. The Main Swimming Pool is surrounded by terraces all of which give ocean views to virtually every lounge chair. 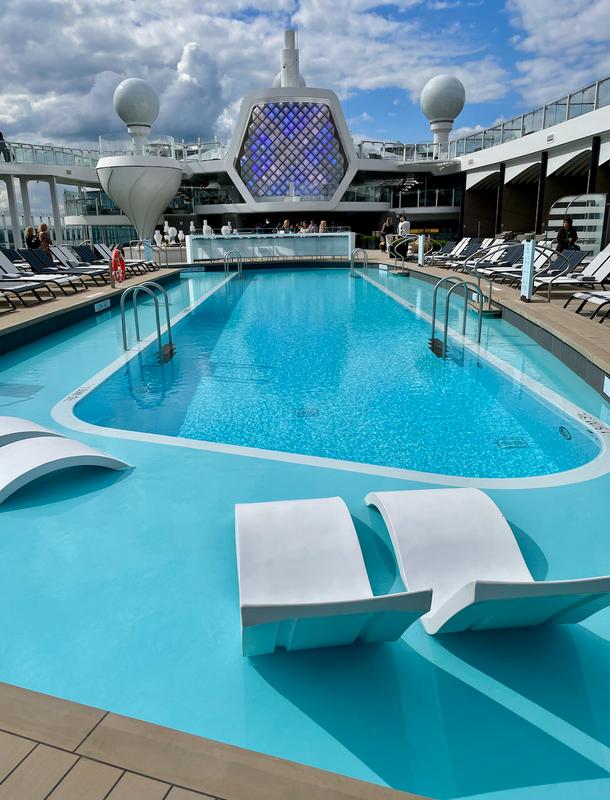 The Solarium is an Adults-Only sanctuary with both pool and hot tubs. The dome guarantees the Solarium can be used in every kind of weather and its loungers are perfect for reading a book or sneaking an afternoon nap. There’s even a Café and Juice Bar so you’ll never be hungry or thirsty. 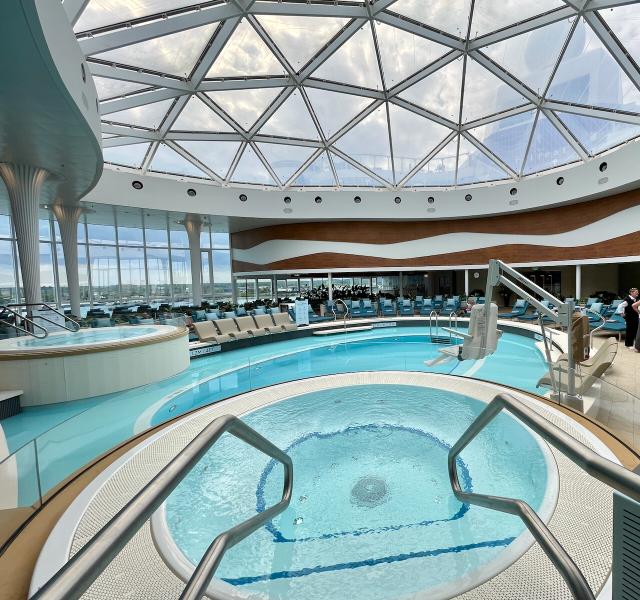 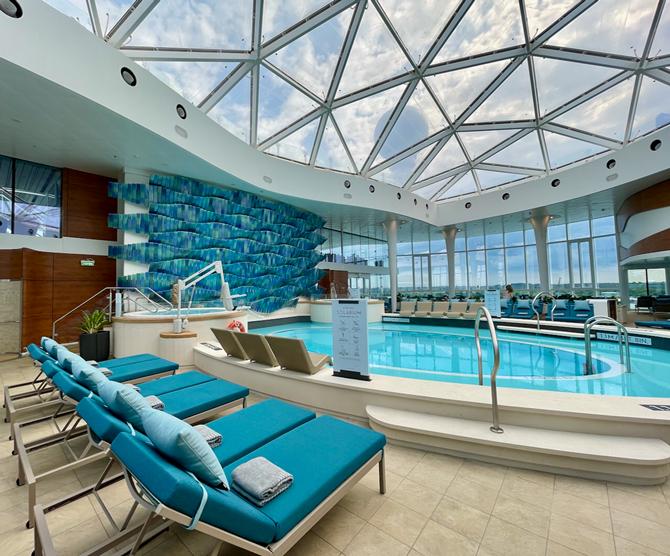 Meanwhile back outside and towards the rear of the ship is the Roof Garden. Designed by British architect Tom Wright it debuted on Edge and once again appears on Beyond. Expect to be entertained with live musical performances, movies and prism light shows here. Go all the way to the stern for the Sunset Bar. The brainchild of designer Nate Berkus, it’s an oasis of comfortable seating, imaginative cocktails and a great place to watch the sun whether it’s setting or not.

Below there are 6 decks of phenomenal staterooms

Celebrity Edge introduced the Infinite Veranda to cruisers. They make the space 23 percent larger than on the 5 Celebrity Solstice class ships. At the flick of switch, half of the wall of windows facing the ocean, opens up. For those who love the sea air, the whole cabin can be filled with it. Or you can opt to close the stateroom off with the opaque glass doors and step outside. All staterooms are incredibly comfortable. The beds feature King-sized mattresses and the linens provided are “Celebrity eXhale Bedding”, pure luxury to the touch. 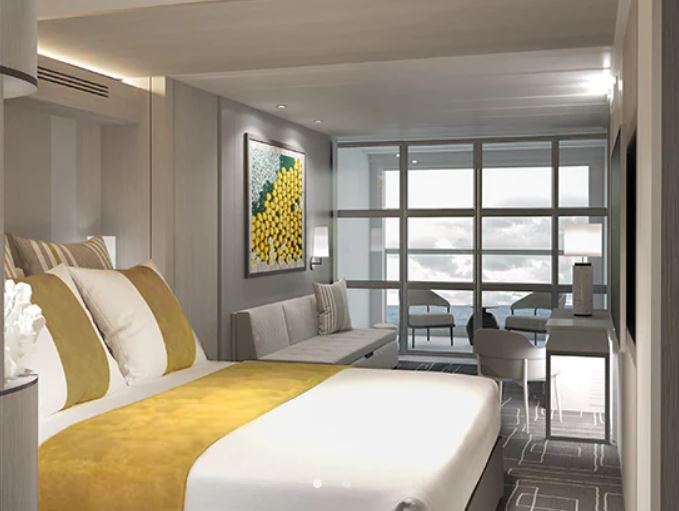 There’s a large screen television with an extensive library of programming. Particularly impressive is how many of its channels offer live programming. Each room has a mini-fridge, ample room for the over-packers among us and a nice little sitting area. The bathrooms are stunning examples of ingenuity and design.

The Activities list aboard Beyond begins at 7 am and goes straight through to 2 am.

We counted 82 activities ranging from Fitness to a Watchmaking Demonstration to a Magician who held forth in the immense Theater in a single day aboard Beyond. There’s a big emphasis on Wellness both in the superb spa and the gym. Beyond even has Gwyneth Paltrow as its “Well-being Advisor”. 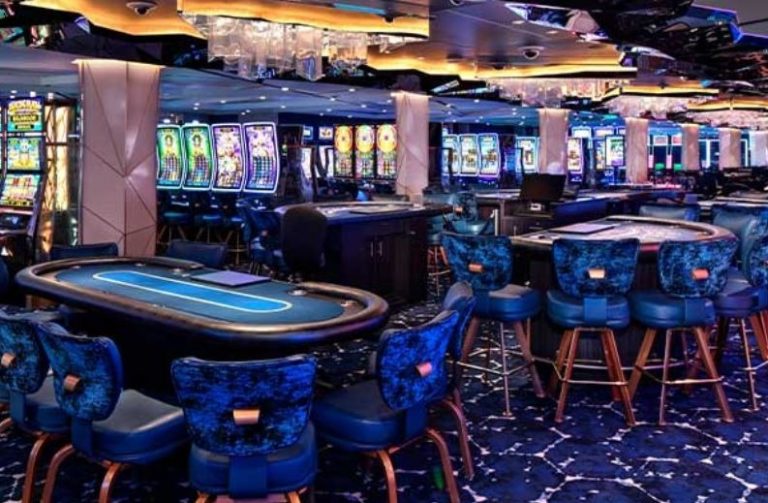 The Casino opens at 9 am on sea days and closes shop at whenever. There are endless opportunities to dance starting at 11 in the morning and wrapping up at The Club at 2 am. And Shop till you drop! There’s an extraordinary collection of high-end retailers including both Cartier and Bulgari. There’s even a mini Apple store. One of my fellow passengers pointed out the allure of not paying sales tax on a single thing whether it’s an Apple watch or a Cartier tank.

And then there’s the Food…

You’ll never go hungry on a cruise ship but be prepared for the splendid quality of what’s on offer on Celebrity Beyond. There are no less than 18 ‘food experiences’ to be enjoyed. (We’ll get to the 14 Cafes, Bars and Lounge soon). The Main Restaurant has been done away with as on Edge. Instead every passenger on the ship can choose a Cuisine and head to the restaurant of their choice. Tuscan is Italian, Normandie is French, Cyprus is Greek and Cosmopolitan is “New American”. There’s a set menu at all four spots. But we found the specialties of each of these beautiful rooms led to wonderful meals. 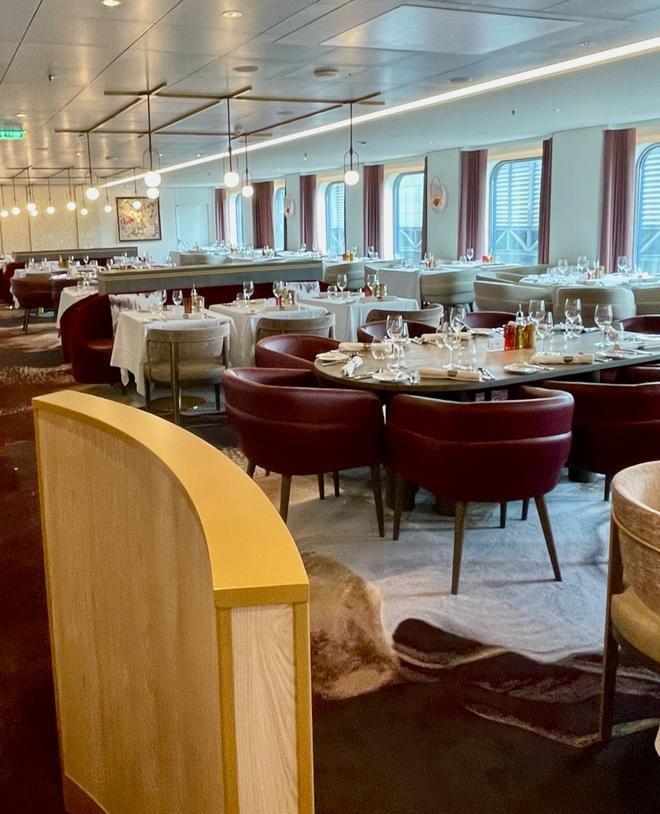 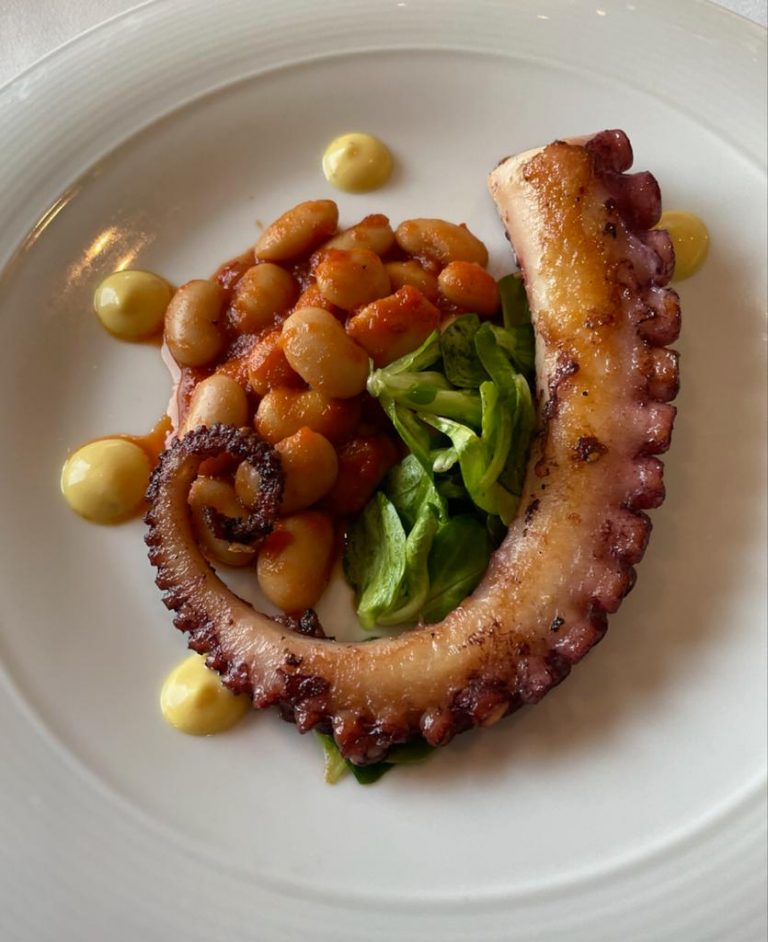 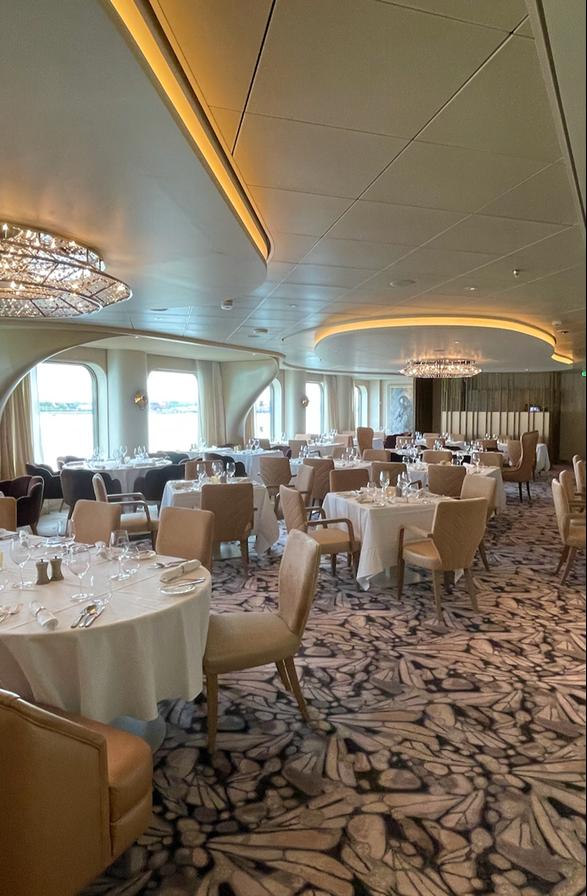 There are another four “Casual Dining” spots open to all and they are scattered about the ship. Of particular note is the almost always open Ocean View Café. It’s an international food festival where you can find Coffee, Tea and Juices 24 hours a day, a Pizza, Pasta and Salad Bar open 13 hours a day, Ice Cream and Frozen Yogurt 10 hours a day and if you’re still feeling peckish at 10 pm, you still have three hours to get there for late night ‘snack’.

Stepping up to the Specialty Restaurants…

There are 8 Restaurants aboard Beyond that add a surcharge when you dine there. All of them offer an elevated dining experience. “Dinner on the Edge” is particularly elevated. It’s the offering on the ship’s cantilevered Magic Carpet. More down to earth experiences include Fine Cut, a truly great ocean-going steak house and Eden, which has an open kitchen and fabulous views over the wake. 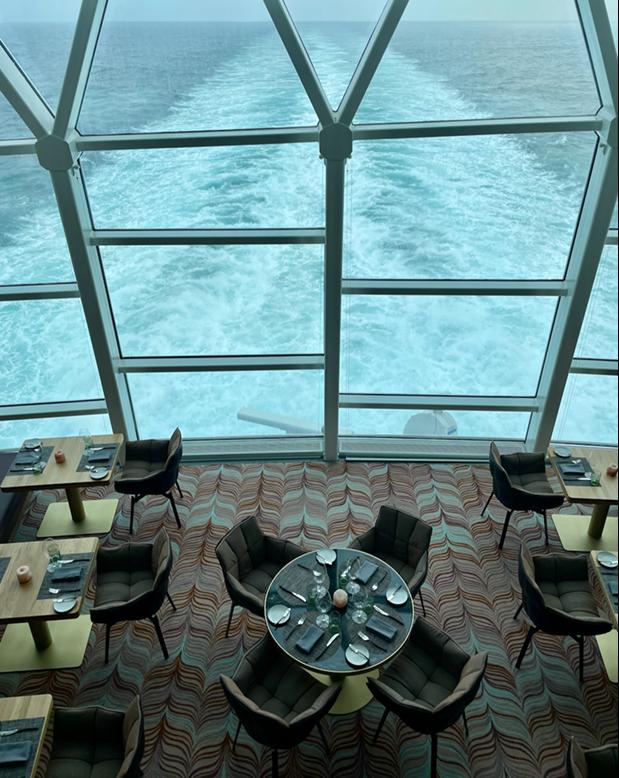 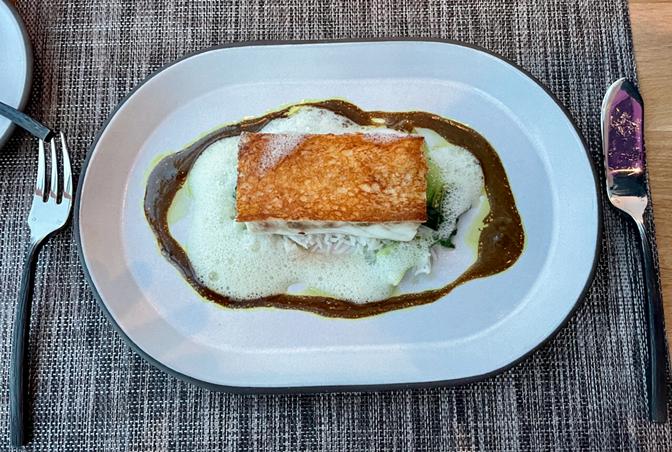 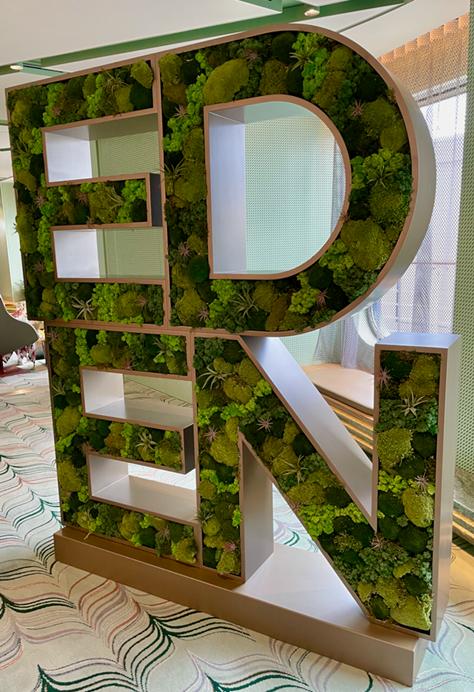 Le Grand Bistro is an amazing experience not only for the food but for the animated “Petit Chef” who comes to life on your table top. But the top of the line is “Le Voyage”. This wonderfully intimate dining room is the first sea-going restaurant from Chef Daniel Boulud. The Chef is Celebrity’s Global Culinary Ambassador. He had created dishes for both Luminae and The Chef’s Table. But this is the restaurant he put his name on. Every dish confirms Chef Boulud’s star in the Culinary Universe. 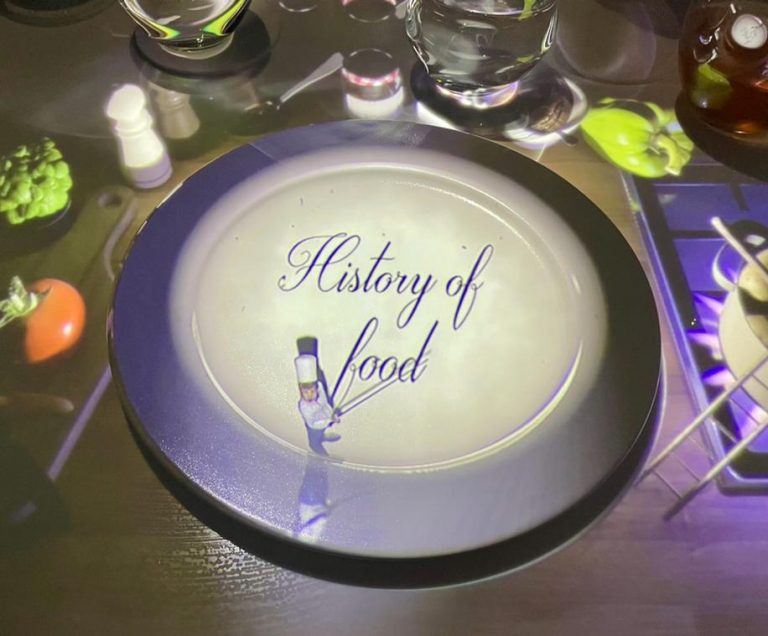 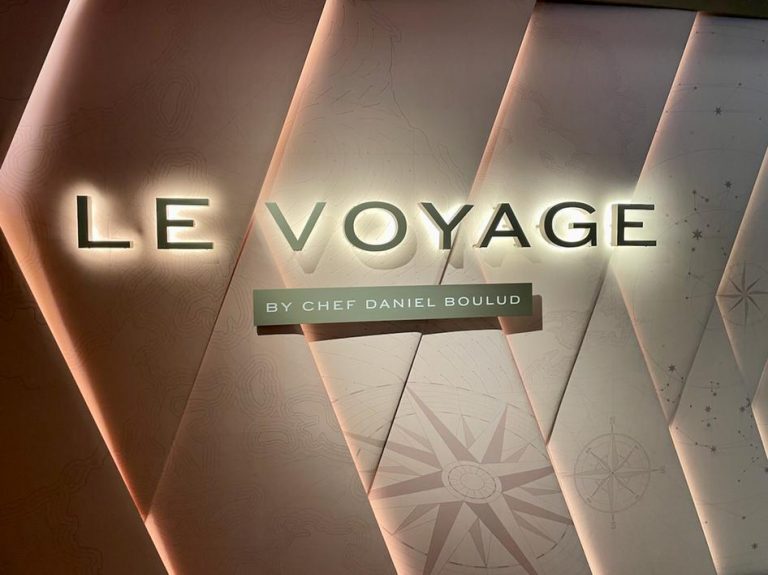 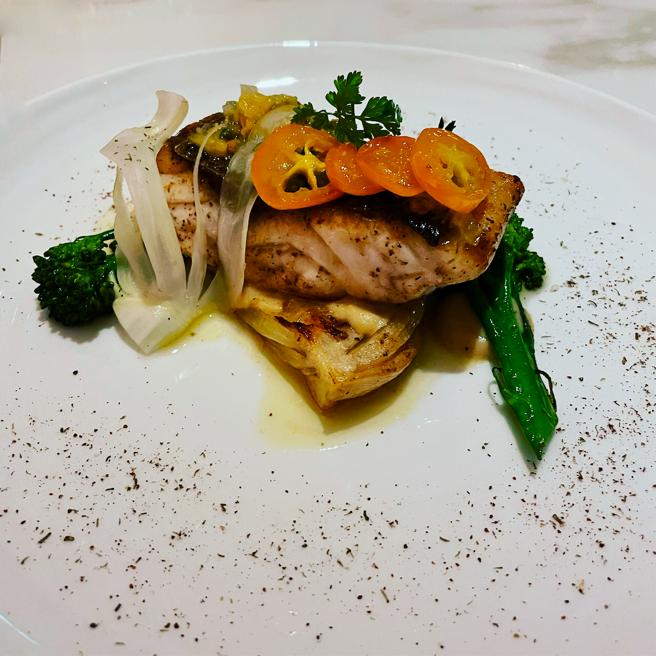 About those 14 Café’s, Bars and Lounges…

Just as you’ll never go hungry, you’ll never go thirsty on Beyond. It should come as no surprise to learn that The Martini Bar popularized on Edge and Apex is bigger on Beyond. It’s bang in the middle of ship rising from Deck 3 all the way to Deck 5. It is truly the center of the ship and a very popular place. The Bartenders preside over a menu of martinis and an amazing “Juggling Act” involving bottles and martini glasses that simply has to be seen to be believed. It’s a regular occurrence twice an evening and should not be missed. 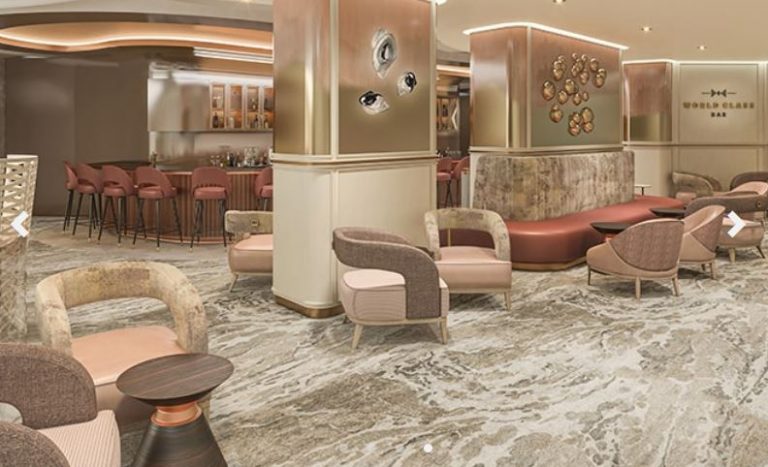 Craft Social Bar is the place for Craft Beers. The Mast Bar provides drinks on the Pool deck. The World Class Bar trades in truly superb mixed drinks. And non-alcoholic Specialty Coffees and pastries are yours at Café al Bacio.

Meet the woman behind Celebrity and Beyond

Lisa Lutoff-Perlo has been in the cruise industry for 35 years. It came as no surprise when she was named CEO of Celebrity Cruises in 2016. Her accomplishments are legendary. She is responsible for Celebrity’s having grown the percentage of women on the bridge of Celebrity’s fleet from 3 percent to 27 percent in just the last four years.

The most visible sign of this progress is “Captain Kate”, Kate McCue who is the Master of Celebrity Beyond. She is the first American woman to ever Captain a Cruise ship. But it is Lisa’s mission to boost diversity and equity everywhere that is so praise worthy. On our voyage on Beyond, we were together with any number of guests with physical disabilities. This was an outreach Ms. Lutoff-Perlo was responsible for. She is intent on inclusiveness that goes beyond women, people of color, LGBT people. She had reached out to a severely war-wounded Press Photographer to create a gallery of phenomenal images of the marginalized people of every nationality and disability. She is truly a leader who makes this world a better place. 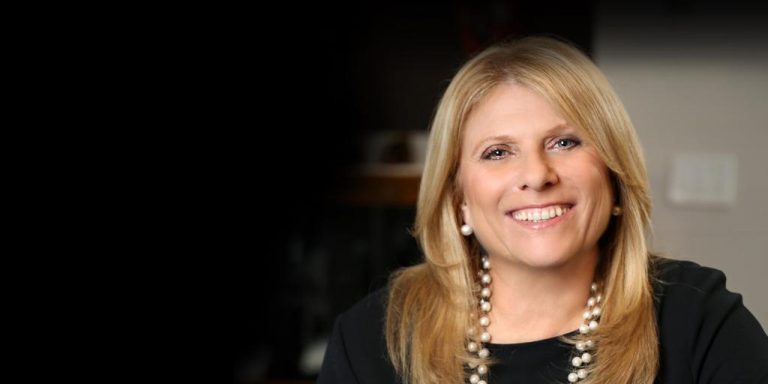 To learn more about Celebrity Beyond, go to www.celebritycruises.com

Beyond will sail to in the Mediterranean this summer before crossing the Atlantic in October. Beyond will spend the winter in both the Eastern and Western Caribbean before returning once again to the Med for Summer 2023.

Don’t miss the Celebrity Cruises Reviews, recommendations, opinions and information on Cruising Journal, with photos, videos and cruises on offer. 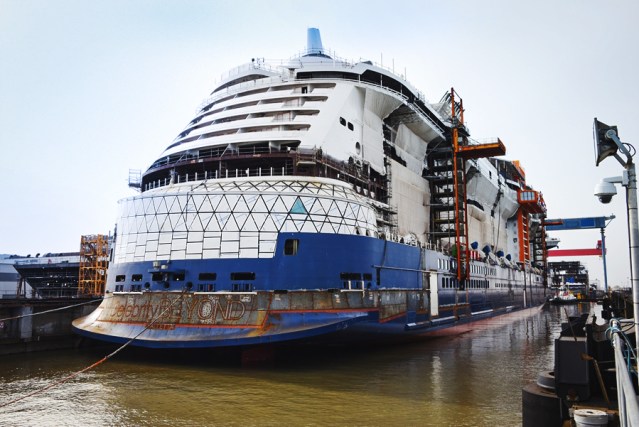