Imagine launching one of the most beautiful cruise ships ever to set sail and then not being able to introduce her to a single passenger for months on end. The Ship is Silversea’s luxurious new Silver Moon.

And when she finally greeted her first passengers this June, she was met with the praise she so justly deserves. Departing on a series of cruises beginning and ending in Athens. Silver Moon wowed her first guests from stem to stern.

Silver Moon is in a class of her own. 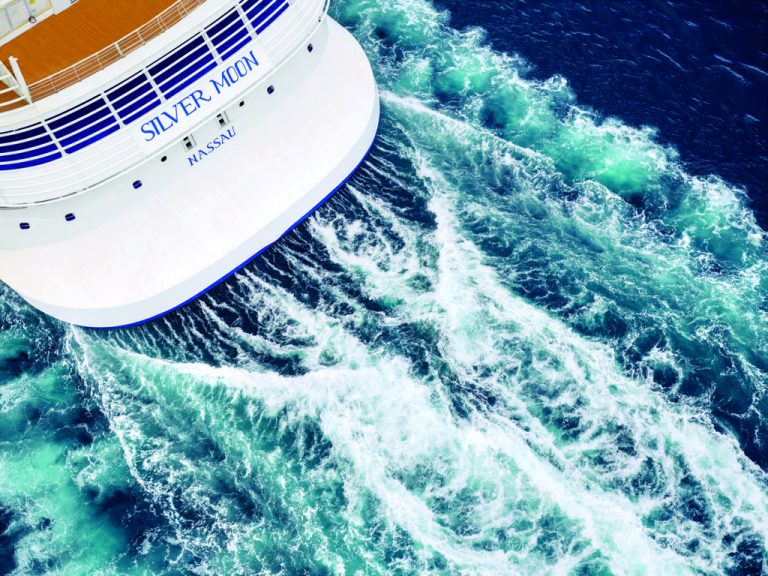 The ninth ship in Silversea’s ever-expanding fleet, Silver Moon carries just 596 passengers catered to by a crew of 411.  That gives 40,700 tonne Silver Moon an almost  unheard-of 1:1.5 guest to crew ratios. Sister ship to Silver Muse, launched in 2017, and the company’s flagship, Silver Moon greets her guests with a number of subtle changes. The Arts Café, renowned for its selection of irresistible treats, is replete with an impressive collection of contemporary Italian art. The Café now shares Deck 8 with Silversea’s signature Fine French Restaurant, La Dame.  The restaurant itself has doubled in size and now includes the option of dining al fresco. It too is a showcase. Lalique crystal panels greet guests at its entrance and line the wall of the restaurant in an homage to René Lalique himself.  To make room for La Dame’s new incarnation, The Connoisseur’s Corner, the cigar bar on Silver Moon has been repositioned to Deck 9. A wintergarden has been added there. 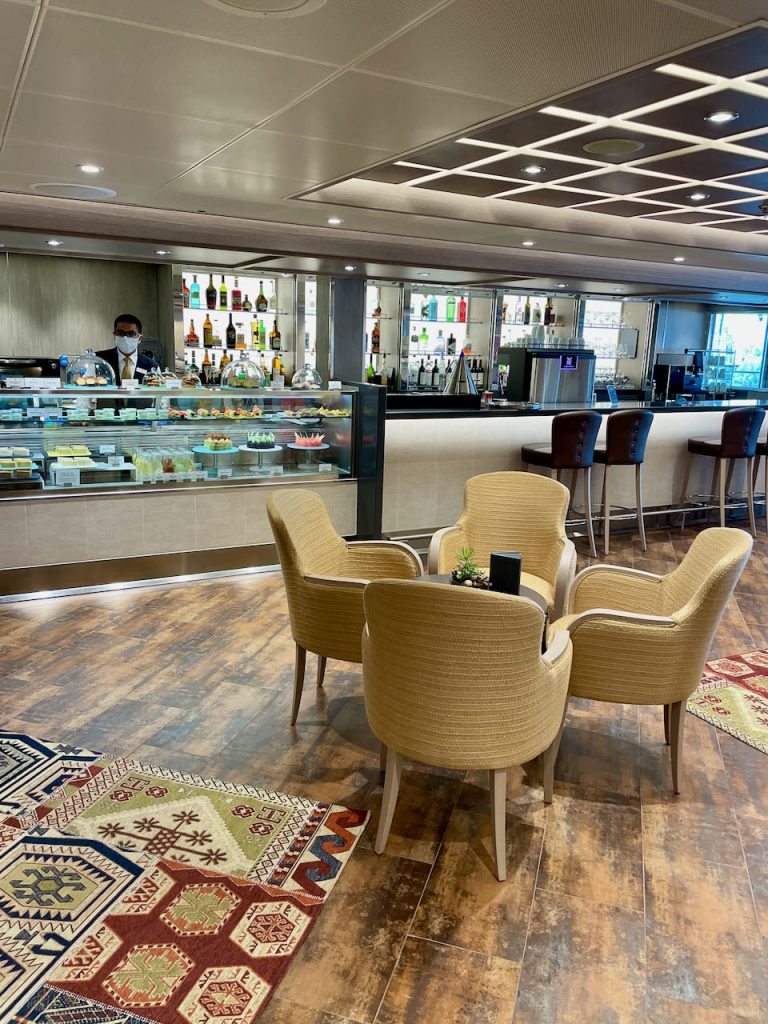 The popular Pool Deck Bar has been enlarged and its waiters cannot bring your Aperol Spritz to you fast enough.  At night the poolside location becomes The Grill and, on at least one occasion on our sailing, into a well-populated dance floor. The Zagara Beauty Spa has also been expanded and for good reason. In addition to all the pampering of beauty salon services and daily fitness classes, aboard Silver Moon, there’s a Medi-Spa presided over by a licensed physician.  Included in his services are Botox, Dysport and Restylane injections with the promise of making us looking 10 years younger!  We took a pass on that promise.  What we didn’t take a pass on was every single one of Silver Moon’s formidable dining options. The Japanese offerings at Kaiseki are both authentic and irresistible. In a more intimate setting than on Silver Muse, Kaiseki offers both a la carte dining and a set menu.  We highly recommend that latter for its wonderful surprises. The Atlantide Restaurant has been expanded and has kept its open-seating promise.  Just for the generous servings of Caviar, we would gladly have eaten there nightly. Both these restaurants are on Deck 4. And it’s on this deck that you’ll discover Silver Moon’s most talked-about additions. 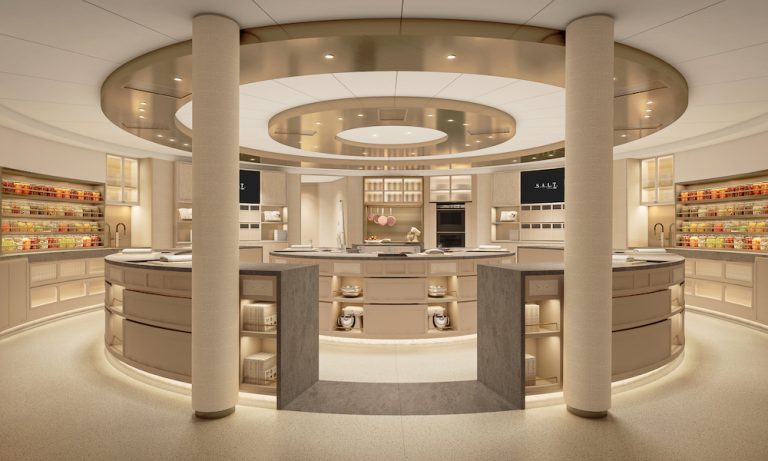 S.A.L.T (Sea And Land Taste) arrives and Culinary Cruising will never be the same.

Setting sail on Silver Moon, an extraordinary new guest experience is launched. Barbara Muckermann, Silversea’s indefatigable marketing maven and now the line’s newly appointed Chief Commercial Officer is the Godmother of S.A.L.T.  Under the directorship of Adam Sachs, James Beard Award-Winning Food Writer and former Editor of Saveur Magazine, S.A.L.T. achieves a remarkable first: A culinary arts program that takes in everything from hands-on cooking classes in S.A.L.T. Lab to extraordinary cocktails in S.A.L.T. Bar and to the most extraordinary restaurant at sea: S.A.L.T. Kitchen. There we were bowled over by menus that captured the unique culinary culture of every single port we stopped in along the way. So the food the night we were in Paros was entirely different from that of Patmos, islands that are just kilometers from each other.  These glorious meals were accompanied by no less than 70 wines exclusive to Greece and Cyprus.  But S.A.L.T. doesn’t stop at the gangway. Virtually every port of call had a S.A.L.T. Ashore excursion. 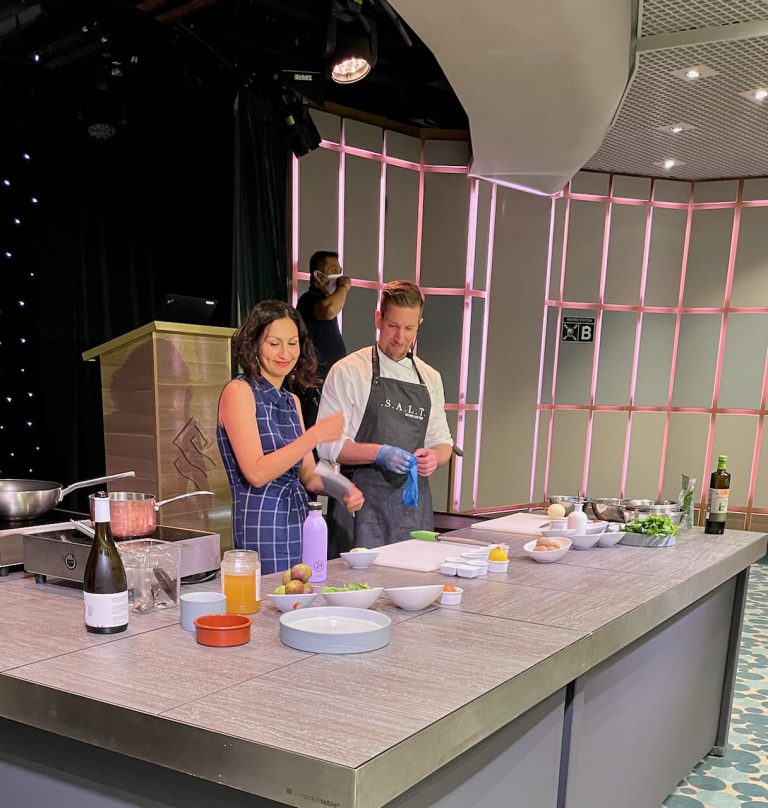 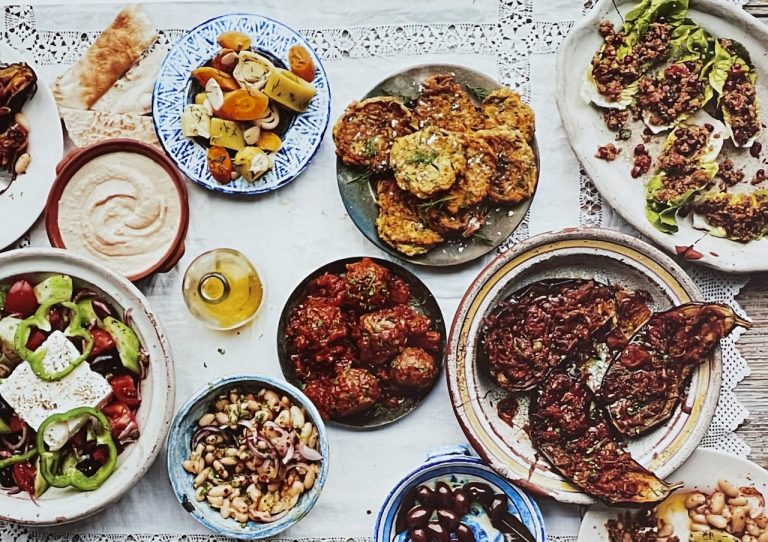 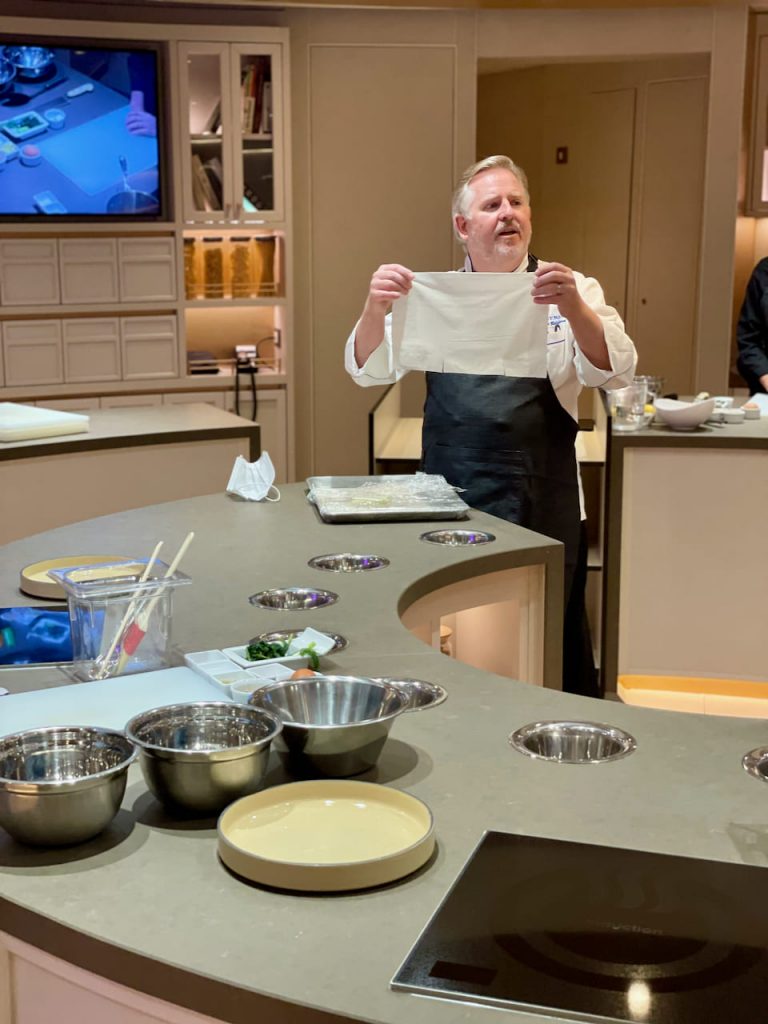 We visited an organic farm then ate the produce grown there at a world-class restaurant right on the beach in tiny Paros. We saw how cheese was made on Mykonos and wine was made in Cyprus. Back on board, S.A.L.T. Lab offers cooking instruction in making many of the dishes we sampled.  You hardly need be a cooking maven to enjoy every minute of these fun classes. Take Phyllo for example: In the course of one hour, we made both Spanakopita –Greece’s famous spinach and feta pie—and Saragli, a close cousin of sweet Baklava. These 12-person classes are presided over by genius teachers like Silversea Chef Dave Bisland.  Meanwhile, in the Venetian Lounge, larger groups assembled to hear Cookbook author and Mediterranean food writer Yasmin Khan.  Overhead cameras followed Silversea Chef Cyrille as he demonstrated Ms. Khan’s recipes from her latest cookbook, “Ripe Figs”. Samples of these were served to an eager audience to enjoy with glasses of white wine.

Altogether, S.A.L.T. is the most extraordinary culinary adventure we’ve ever enjoyed at sea.

Silver Moon’s Suites are the stuff dreams are made of 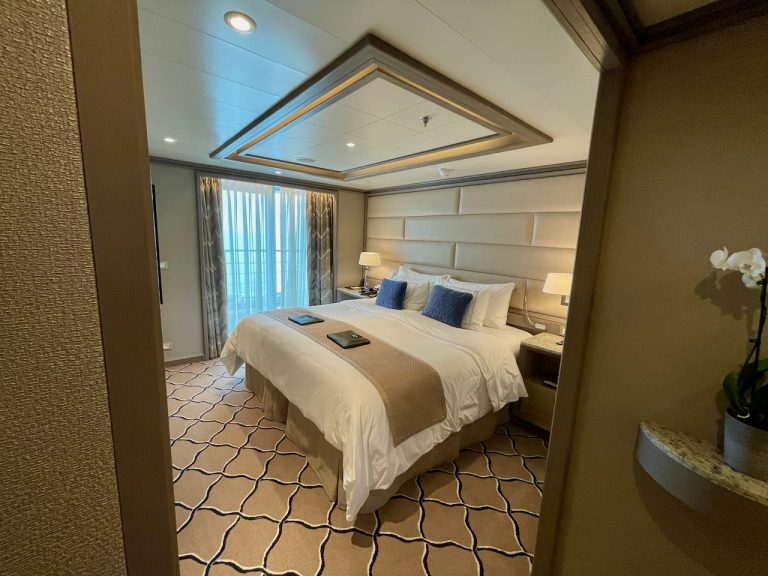 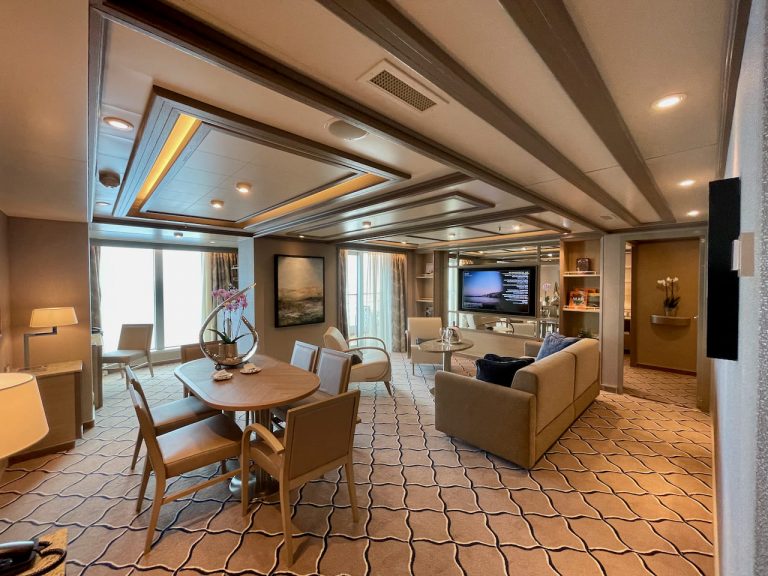 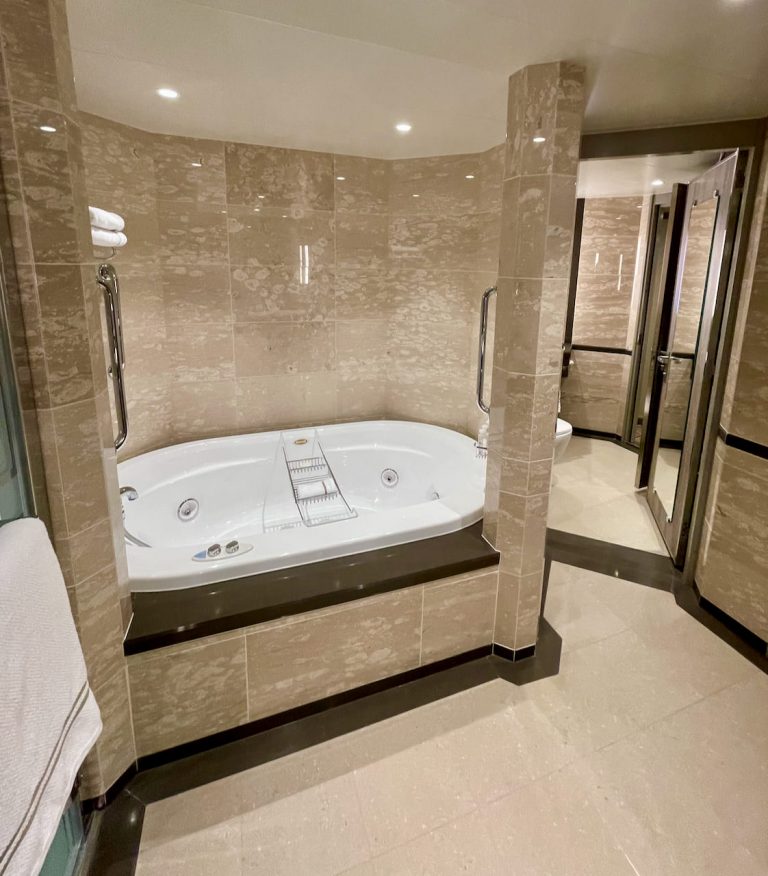 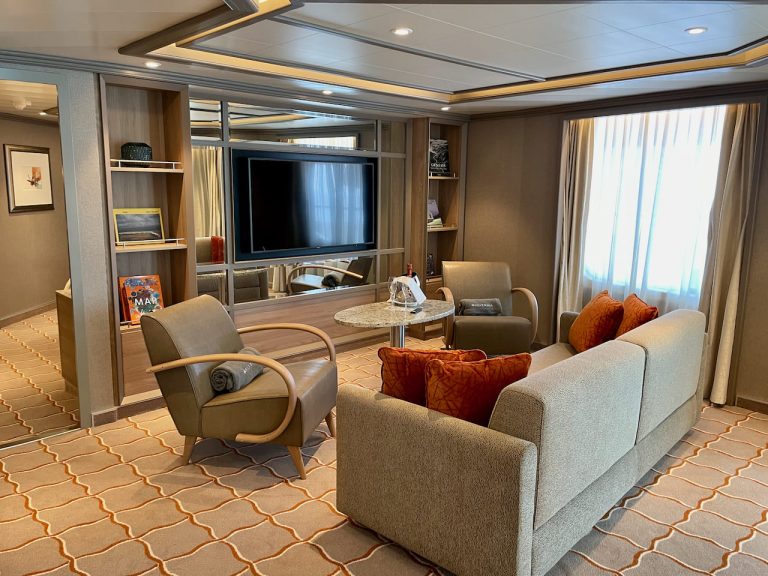 Featuring private verandas for virtually every single suite, and an ocean view for all, Silver Moon’s guests are pampered by the services of both a Butler and a Housekeeper assigned to every suite. (For safety’s sake, every morning every passenger on this fully vaccinated passenger and crew list, has their temperature taken digitally by their butler. We looked forward to seeing Rodolfo, who took such good care of us along with Eleanor, our housekeeper every morning.)

The smallest suite measures 333 square feet. The Veranda suites are 387 square feet and include a 64 square foot veranda.  The most popular suites are the Silver Suites and like every premium suite, they can be combined with a neighboring Veranda Suite for 2-bedroom configurations.  The Royal Suites and the Grand Suites feature sweeping views over the bow of the ship. In the case of the Grand Suites, this includes semi-circular outdoor terraces and up to 1572 square feet of living space. Finally, there are the Owner’s Suites. From their midship location, even their master bathrooms have views of the sea.

Given to ships that adhere to proscribed methods of water treatment, exhaust systems and environmental features more and more cruise passengers embrace with every sailing.

After her summer in Greece, Silver Moon is set to depart on over 120 itineraries to places as far flung as Singapore and Hong Kong, Dubai and Reykjavik. How we wish we could be aboard every one of them. For more information visit www.silversea.com