Viking Cruises has all of 8 ships plying the oceans of the world and an ever-expanding fleet of Expedition vessels, and now Viking says “welcome back” to Europe’s most fabled Rivers.

It’s worth remembering that the highly-rated cruise line started out on the Rivers of Europe all the way back in 1997.  After what Viking Chairman Torstein Hagen describes in television commercials as a period like “ a long, long Norwegian Winter” the line is back doing what it does so superbly: introducing its life-long learners to its ‘thinking man’s cruises’ on Europe’s most fascinating rivers.

Who can forget Viking’s presence American Public Television’s Masterpiece Theater?  In the midst of watching the incredibly popular “Downton Abbey”, a long ship would appear along with incomparable scenery and sights along the way.  This writer confesses that this advertising that introduced Americans to river cruising in record numbers didn’t do justice to the experience to be had on Viking’s “Longships”. 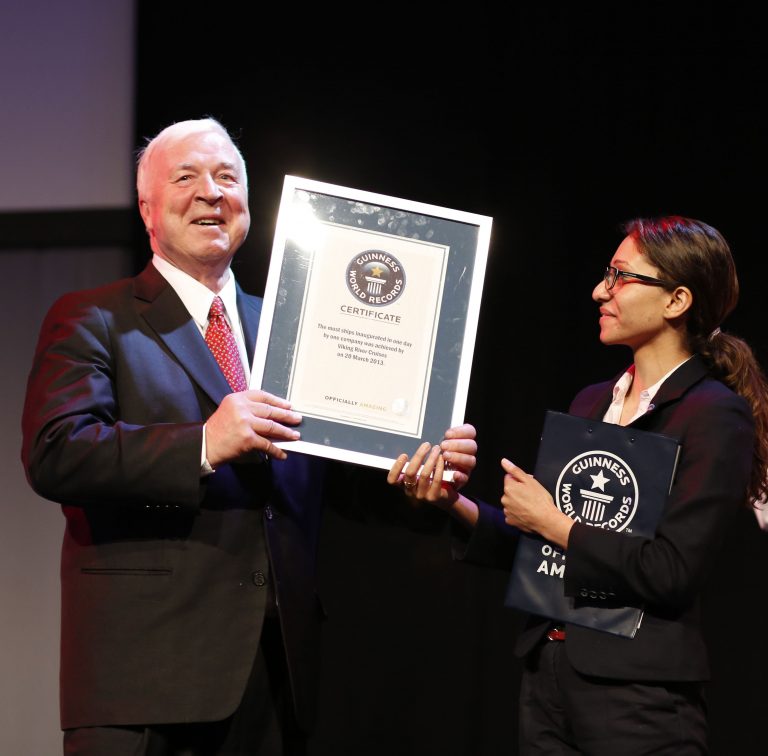 In one day in 2013 Viking christened 10 Longships only to outdo themselves over two days in 2014.  That auspicious event saw no less than 16 longships christened. The name “longship” pays homage to the long, narrow warships powered by oar and sail that the Vikings used for trade, commerce, and exploration. The modern longships carry just 190 passengers in luxury the original Norseman could never have imagined. When Viking took to the rivers it brought along a passion for comfort, superb Scandinavian design, and culinary excellence. And that is just aboard ships. On land, in luxury Mercedes coaches, the passengers are divided into smaller groups of 25 to 30 people. These included excursions feature local guides who shepherd tour groups through the historic towns and cities that line the shores of the rivers. In addition to giving passengers a thorough introduction to every port, all include at least an hour’s time to indulge in personal pursuits. 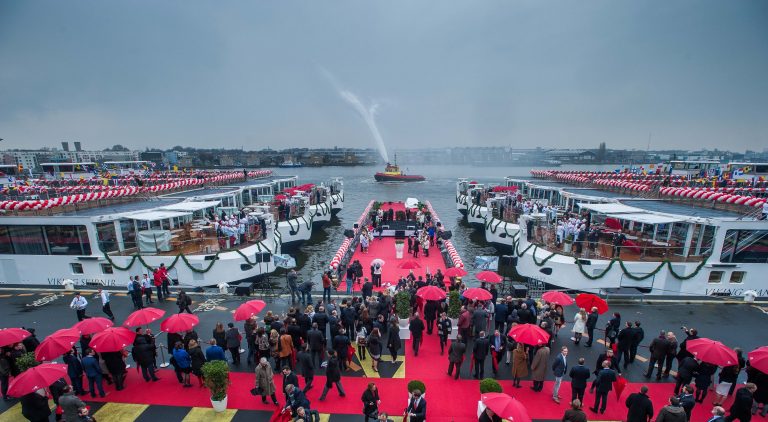 Back aboard the ship, guests retreat to snug staterooms that are the epitome of Scandinavian design genius:

A place for everything, your own mini-fridge, and cabin service that surprises with its gnome-like ability to service your stateroom while they’re at breakfast.  Spring for a balcony which allows you a breath fresh air anytime you wish. But even the minimum grade will give you first-class comfort, if not the striking views you’ll see from the upper two decks.

Who is Viking River for? And who is it not?

Oh, the people you’ll meet! These voyages are not for casino goers, tuxedo wearers, or children under 18. They are for lifetime learners — people who want to experience a culture with like-minded adults. The passenger list is filled with successful, accomplished people. And the greatest surprise may be how much fun people have. Unassigned tables for six, eight, or 10 find people mixing and mingling as the decibel level rises by the day. Toward the end of the voyage, the whole ship seems to know and adore each other. That likely explains why a passenger-organized talent show was the hit of the trip. And why, on the last night, there was actually a group of people dancing on the tables. And nobody asked them to stop. 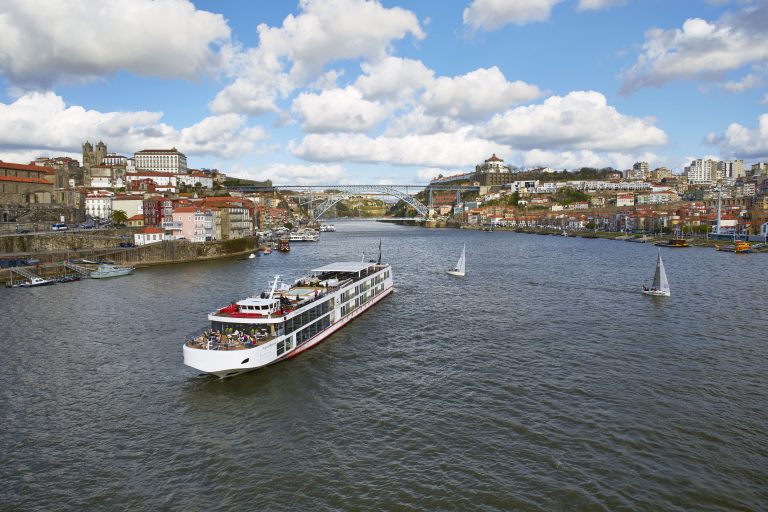 Rhine Getaway (8 days Amsterdam to Basel). This is the opportunity to see the Castles on Rhine and so much more.  Explore one of Europe’s best-loved rivers, the Rhine. Discover the turreted fortresses, grand cathedrals, historic cities, medieval towns and spectacular scenery of the Middle Rhine—a UNESCO World Heritage Site. Taste the region’s renowned white wines, the roots of its terraced vineyards reaching back to Roman times. Savor the various culinary traditions of Alsace. From Amsterdam and Cologne to Basel, this journey reveals a rich landscape of beauty and culture. Multiple sailing dates July through December 2021.

Portugal’s River of Gold (10 days; Lisbon to Porto) – This wonderful trip is an unparalleled tour of Portugal. Starting with two days in fabulous Lisbon, you’ll also explore two of Iberia’s oldest university towns: Coimbra, Portugal and Salamanca, Spain. In wonderful Porto you can roam the port warehouses. Enjoy traditional cuisine, wine and fado singing. Then you’ll cruise the Douro River Valley, the world’s oldest demarcated wine region and a UNESCO Site. This10-day cruisetour includes a hotel stay in Lisbon and the added bonus of only sailing the Douro by day so you won’t miss a minute of its incredible scenery .Multiple sailing dates July through October 2021.

Paris & the Heart of Normandy (8 days; Paris to Rouen to Paris) – This exploration touches on France’s extraordinary gifts to history, art, food from its magnificent capitol to its Norman coast. Explore Giverny and visit the beautiful gardens and charming farmhouse where Claude Monet lived and worked. Trace the footsteps of Joan of Arc in Rouen. Walk hallowed ground at Normandy’s American Military Cemetery and World War II beaches. Savor Normandy cuisine. This 8-day cruise along the Seine River is an unforgettable taste of La Belle France.  Multiple sailing dates July through December 2021.

Lyon & Provence (8 days; Avignon to Lyon) – The South of France beckons again and again. Tap into your inner van Gogh at an Arles painting class. Discover Roman Provence at Les Arènes amphitheater and the Pont du Gard. Explore Avignon’s Palace of the Popes. Excite your palate in Lyon, capital of French gastronomy. Savor Beaujolais wines. Hunt for truffles and see how chèvre cheese is made. Come witness the beauty that inspired artists like Cézanne and Chagall on this 8-day Rhône cruise. Multiple sailing dates July through November 2021.

France’s Finest (15 days; Paris to Avignon) – Explore France from top to bottom on this 15 journey that combines both Paris & the Heart of Normandy and Lyon & Provence itineraries in one glorious trip.  Pay your respects at Normandy’s World War II beaches. Walk in Joan of Arc’s footsteps at Rouen. Luxuriate in Paris’s sophistication. Savor Lyon’s culinary heritage. Raise a glass in Beaujolais vineyards. Celebrate the Provençal lifestyle. Art, cuisine, style, joie de vivre—everything  you love about France in one glorious 15-day journey. But hurry this one is offered just in August and September 2021 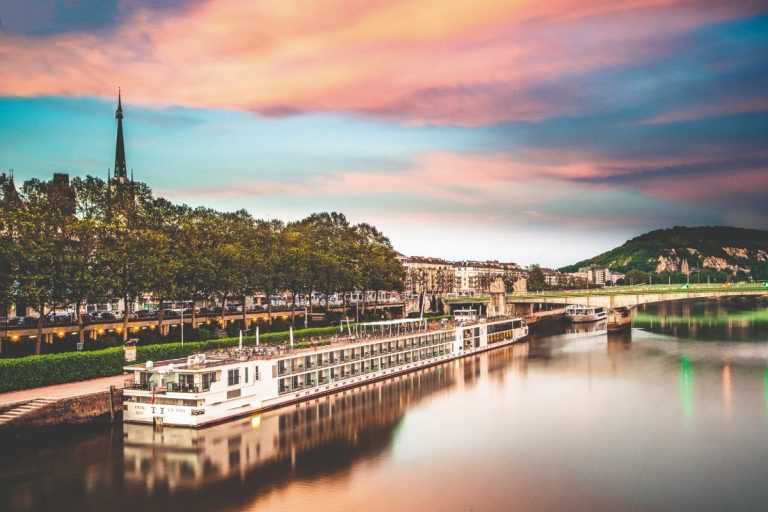 Grounded in scientific research, the Viking Health & Safety Program was developed in partnership with an international team of medical advisors, including Raquel C. Bono, M.D., Viking’s Chief Health Officer. Dr. Bono is a board-certified trauma surgeon and retired Vice Admiral of the United States Navy Medical Corps—and most recently led Washington State’s medical and healthcare systems response to the COVID-19 pandemic. Utilizing a full-scale laboratory installed on every Viking ocean ship—and a strong network of dedicated shoreside labs for Viking river ships in Europe—all guests and crew will receive frequent quick and easy non-invasive saliva PCR tests. New air purification technology has also been installed on all Viking ships, which have always featured independent air handling units for all guest staterooms. And additional health checks, sanitization and physical distancing measures will provide further protection for Viking guests and crew at all points of the journey. A complete overview of the Viking Health & Safety Program can be found at: www.viking.com/health-safety.