Discovering Syracuse on a Cruise!

What to see during a stopover in Syracuse? Cruising journal gives you the information you need for an independent tour! When visiting Syracuse you will be immersed in a wonderful collection of historical sites from the ancient Greek and Roman eras.

The island of Ortigia is the oldest part of the city of Syracuse, so much so that it is considered the true historic centre of the Sicilian city. This is where our tour will begin!

Once you have left the port and crossed the Umbertino or Santa Lucia bridges (the two bridges that connect the island to the city) you will find yourself in the fascinating Ortigia.

If you continue past the bridge you will be greeted by the Temple of Apollo. It is one of the most important monuments of Ortigia, and is certainly the oldest Doric temple of the Western Greek world, dating back to the beginning of the 6th century BC. Over the centuries it has been transformed into a Byzantine church, an Arab mosque and a Norman church. 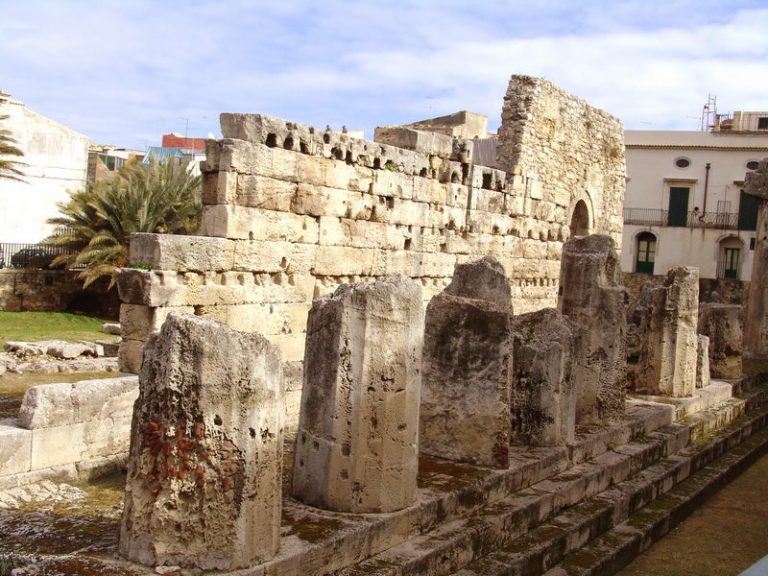 From the temple, you can continue along Corso Giacomo Matteotti (the commercial area of the city) to Piazza Archimede. Here you will be able to admire the Diana Fountain. The divinity, who in Greek times was the protector of Ortigia and is depicted according to classical iconography, with a bow and dog. At her feet is Arethusa who stretches out as she is being transformed into a fountain. 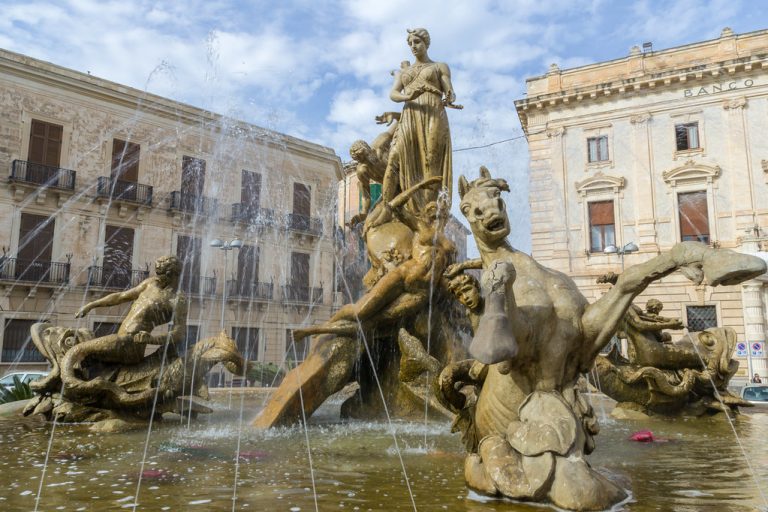 From Piazza Archimede, if you continue to the right on Via della Amalfitania and then left on Via S. Landolina, where you will find many shops and you will reach Piazza del Duomo which is considered one of the most beautiful Baroque squares in Sicily.

You can admire the Metropolitan Cathedral of the Nativity of the Blessed Virgin Mary (Duomo di Siracusa) designed with a blend of Baroque and Rococo elements, the Beneventano Palace, the Town Hall, the Archbishop’s Palace and the Church of Santa Lucia alla Badia, which houses a painting by Caravaggio painted during the artist’s stay in Syracuse. 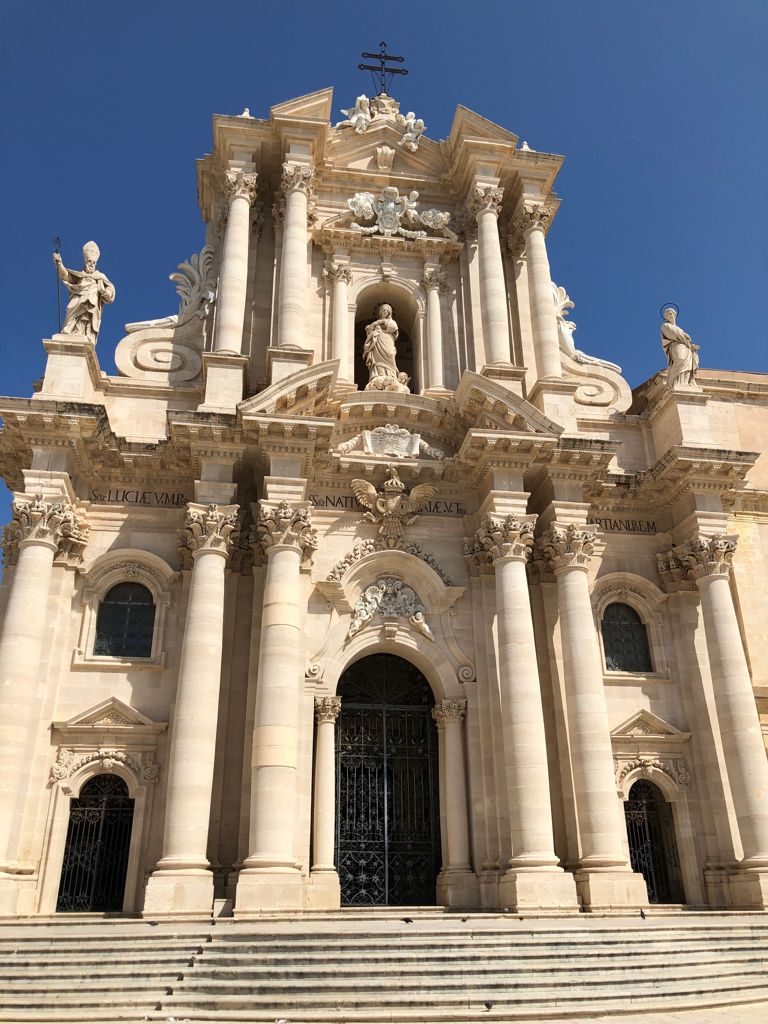 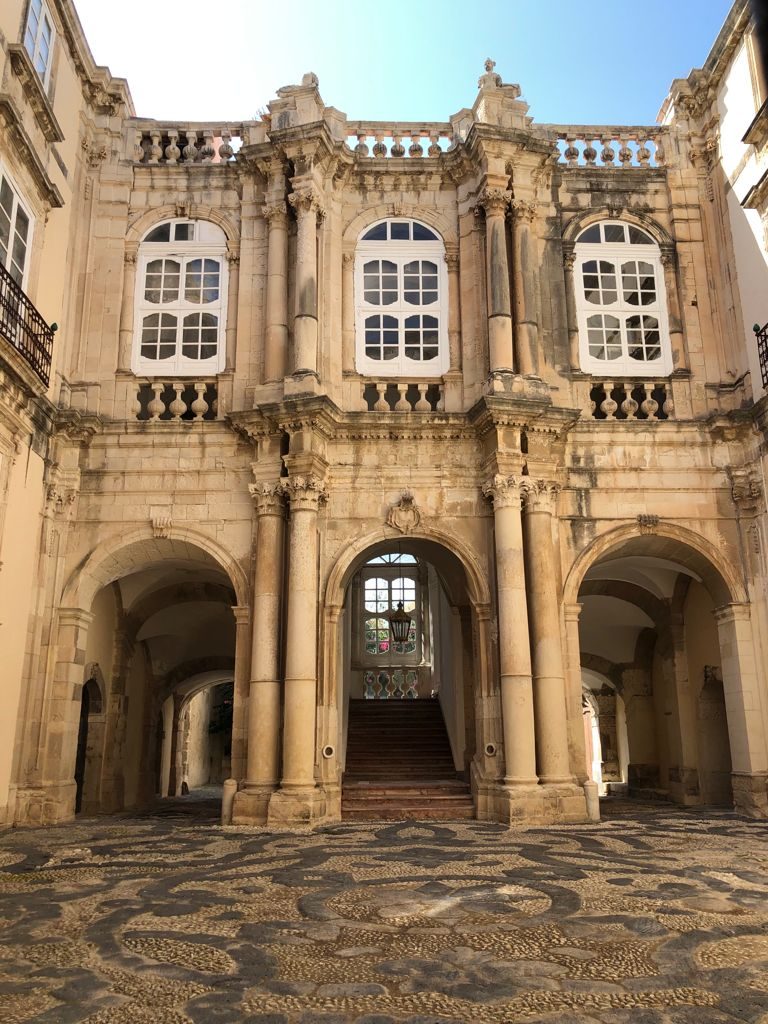 If you continue from the Duomo for about 600 metres, you will reach the Fountain of Arethusa. Its origin is the evolution of one of the many outlets of the water table found in the Syracuse area. The fountain is the symbol of the city, as well as a place where you can admire one of the rare European examples of spontaneous papyrus growth. There is also an ancient legend about this place, which recounts the story of a beautiful woman named Arethusa and Alphaeus, son of the God Ocean, who fell in love with her when he saw her naked in the waters of the Mediterranean.

Frightened by the Greek god, Arethusa fled to the island of Ortigia and asked the goddess Artemis for help, who turned her into a spring. Alphaeus, now madly in love with the girl, asked Zeus to intervene, and Zeus in turn turned him into a river, so that he could reach his beloved Arethusa by crossing the waters of the Ionian Sea. 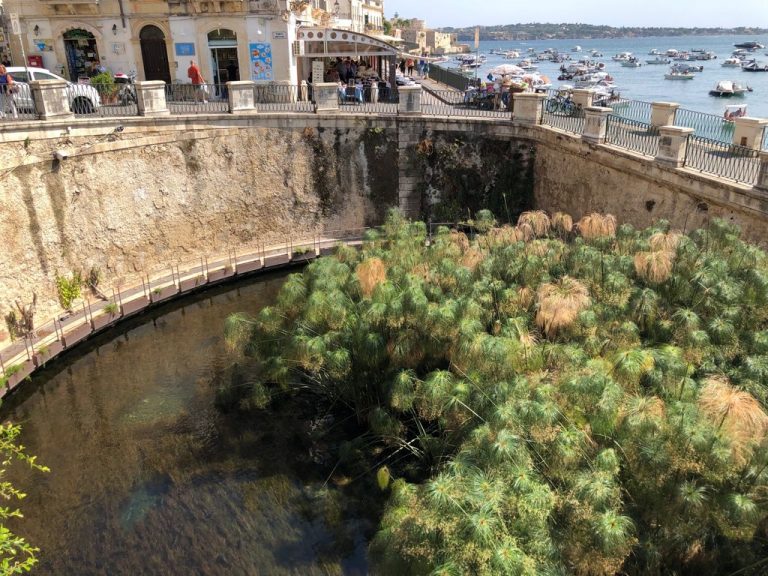 From the spring and continuing along Via Castello Maniace for about 350 metres, you arrive at Maniace Castle. The castle has a quadrilateral structure. At the four corners of the building are four cylindrical towers with an octagonal base. Access is obtained by purchasing a ticket. 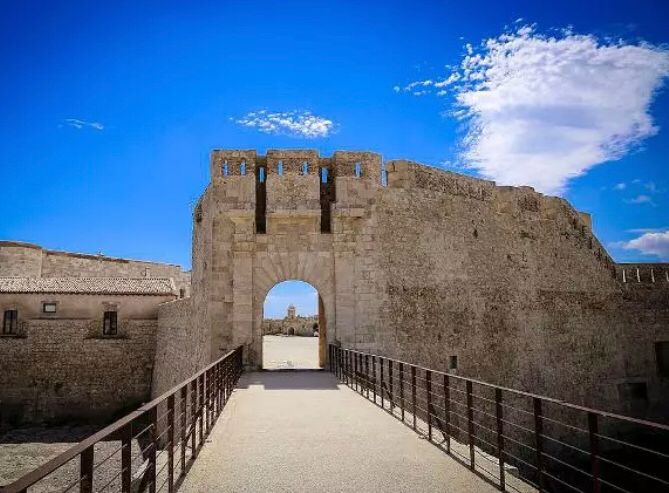 From the Maniace Castle turn into Via Gaetano Abela and continue along the seafront of Ortigia for about 300 metres to reach Cala Rossa, a small cove of pebbles and stones where you can stop for a swim. 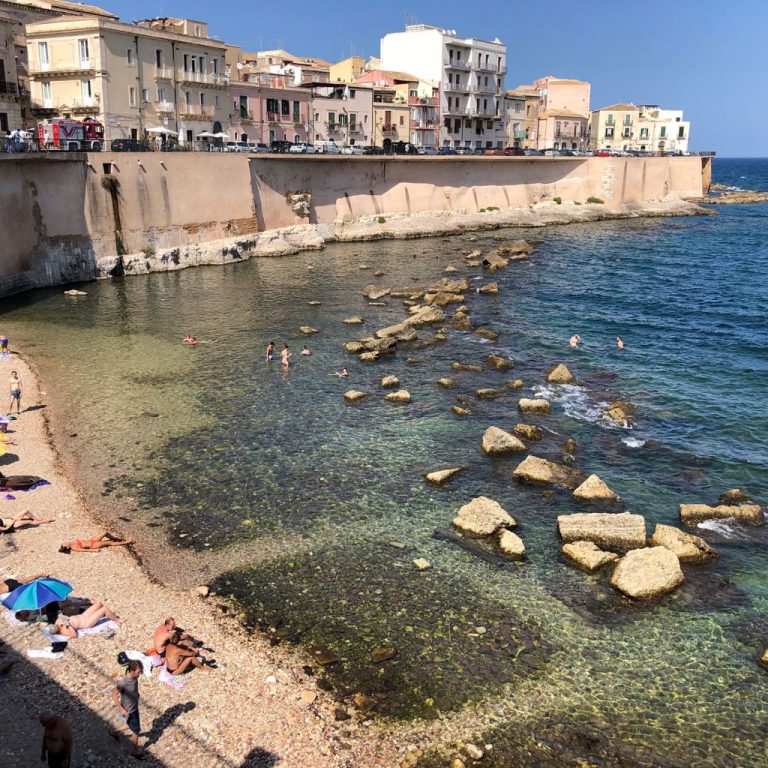 If you want to stop for a snack afterwards, I would recommend going to Via Roma 123 (less than 100 metres away), where you will find a place that sells mixed fried food (fish or potatoes) served in wooden boxes. If you’d rather try one of the typical Sicilian sweets such as cannolo, cassata, granitas or brioche with ice cream, you’ll find plenty of bars along the streets. 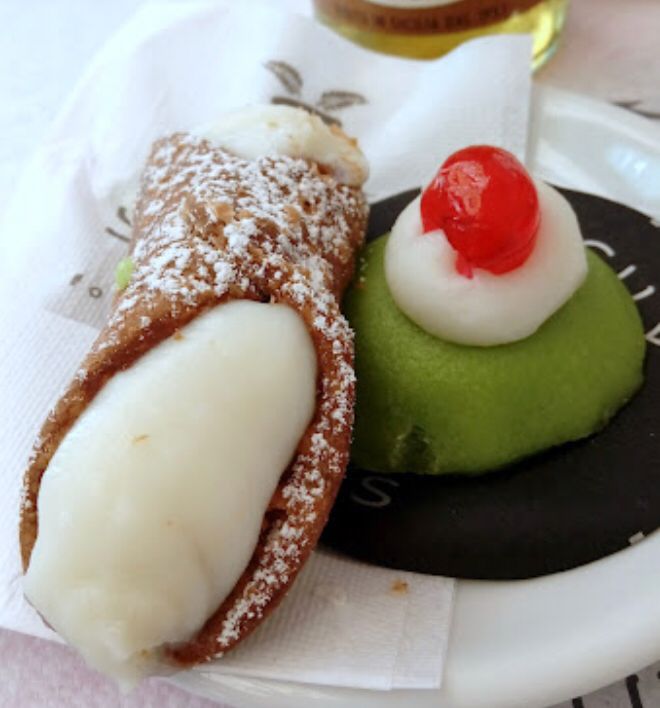 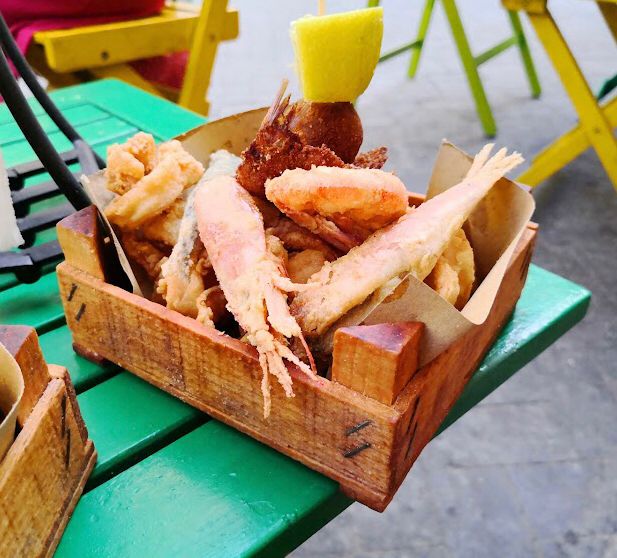 Once you’ve seen the historical and important spots in Ortigia, what I would recommend is to get lost in the narrow streets on your way back or take a walk along the seafront. (The tour of Ortigia takes about 2 hours).

But there are also other treasures to discover in the city of Syracuse! I will also give you a tour of the rest of the city, so you can choose what you like best!

From the Umbertino bridge, 2 km away is the Neapolis Archaeological Park, located in the northern part of the modern city of Syracuse, in Viale Paradiso. Once inside (for a fee), you can admire: A Roman amphitheatre, almost completely excavated in the rock; An enormous Greek theatre; The ara of Hieron II, dedicated to Zeus; The ear of Dionysius which is an ancient limestone quarry over 20 metres high where the sound of voices is amplified. The whole area can be visited in 1h/ 1he30min, while guided tours last 2 hours. 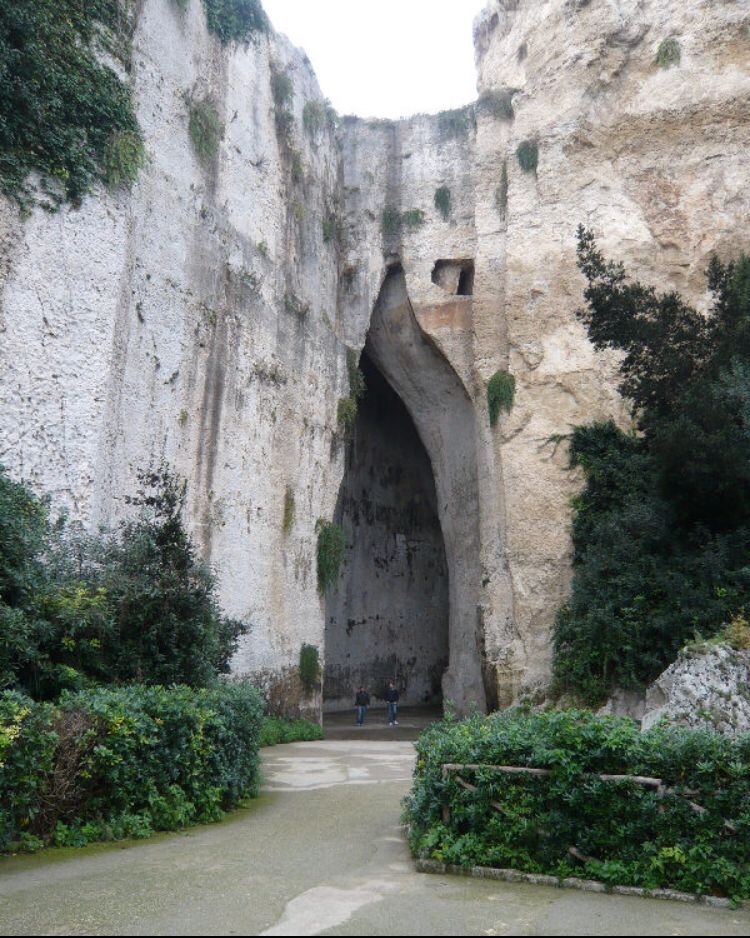 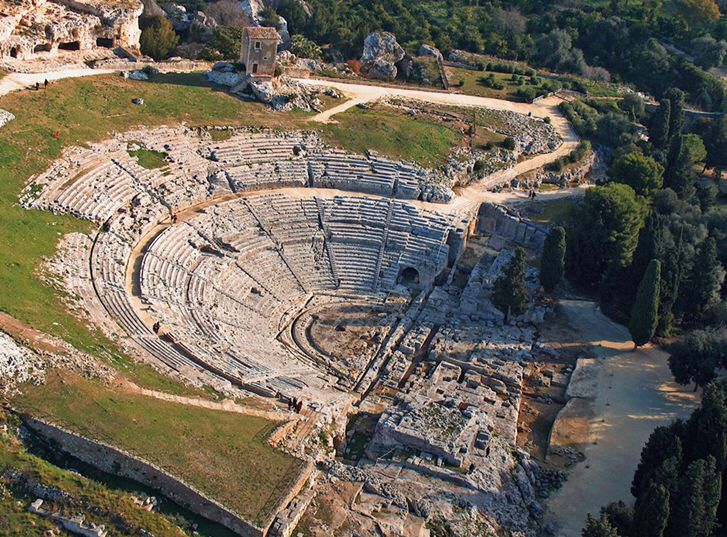 Passing through Viale Augusto and Viale Teocrito you can reach the Paolo Orsi Archaeological Museum, which houses a collection of statues, sculptures, ceramics and various objects ranging from the period of Sicilian prehistory to Greek colonisation. While walking along, the Basilica Santuario Madonna delle Lacrime will certainly capture your attention for its distinctly uncommon external architecture. 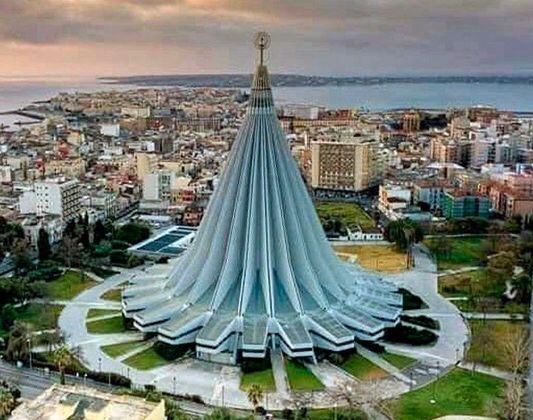 Nearby, at Largo Marciano, you will find the Church of San Giovanni in the Catacombs, a suggestive open-air church, where you can visit the catacombs with a guided tour. 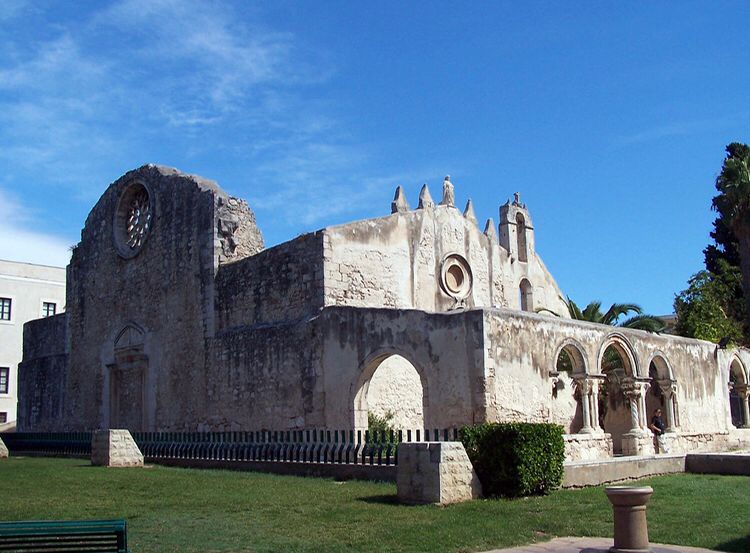 Church of San Giovanni in the Catacombs – Syracuse

If you just want to enjoy the sea, you can take one of the boat tours, with the option of 1 to 2 hour tours! You will find stands in many streets and particularly on the Umbertino bridge!

Follow Cruising Journal for news, information, reviews and other port of call guides.