Cruises of the future: moving toward “protected ships”

Stefano Pastrovich, an established architect and yacht designer based in Monaco, explained to Cruising Journal some of the possible short and long term solutions for the resumption of the cruise market. From the use of fabrics for internal separations, to the concept of a ship as a “protected island” and as the destination itself for the trip, we discuss a series of small and large changes to both the technical aspects as well as attitudes about going to sea.

No one could have imagined seeing all the cruise ships in the entire world completely stop their activity, which is usually so frenetic, and wait for a solution that even today seems far from being reached. There is no doubt that all the fleets will return to sailing and that cruises will resume offering a form of vacation that has undergone such a huge evolution in recent years. However, there are many doubts about the conditions that will have to be respected, not only as a remedy to the epidemic that we are facing, but also to prevent them in the future. The world, in fact, beyond fighting, must heighten its defenses against the emergence of similar problems.

Today, cruise companies find themselves waiting for the regulations that will be put in place in the many countries with cruise ports, that will hopefully be as uniform as possible, in order to facilitate the equipment and arrangements that will be necessary on board. If on the one hand it is difficult to think about revolutionizing the practices and spaces in just a few days, on the other hand the economic damage being sustained pushes for the immediate restarting of cruise itineraries.

Stefano Pastrovich, the owner of the naval architecture studio of the same name in Montecarlo, has given us some food for thought and some short and long term scenarios in order to face the future of world cruise travel. The architect, who specializes in complete design of every type of yacht and is the creator of many interesting projects for cruise ships, has shared with us some of his ideas on the concept of a “new ship” that will satisfy the needs of the “new lives” that await us after the end of the pandemic emergency. “My profession is that of architect and what I do is analyze the problems related to social changes, transforming them into projects,” says Pastrovich. He points out, “Architects are professionals who have to constantly rethink their job. They have to react to the stimulation/crisis of the present and offer solutions for today and for tomorrow. But they also have to have a long-term vision.” 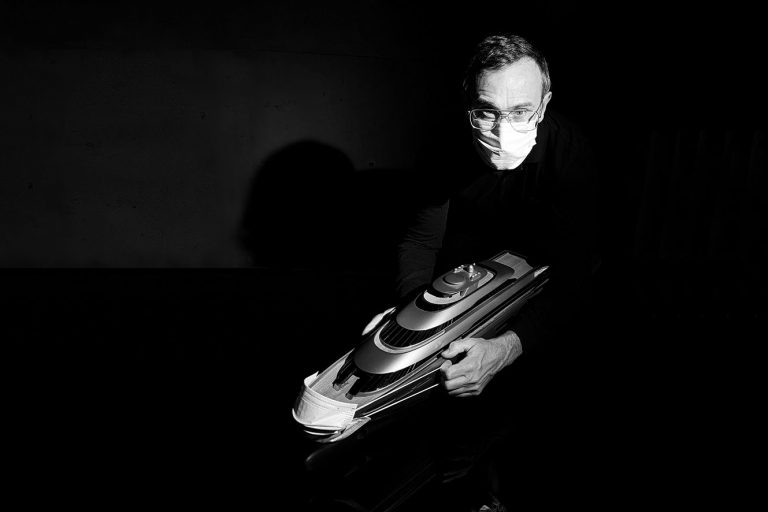 The current need is to increase objects on board that can create separation, but without having them be perceived as an obstacle to the enjoyment of the cruise or an invasive limitation. “Technology helps the architect and offers effective, efficient and practical solutions to resolve the problem of social distancing between passengers, without necessarily disturbing the layout of an interior space.” A solution advocated for by Pastrovich is that of the use of fabrics to create internal separations between the various spaces of the ship. The use of dreaded plexiglass, on which some suggestions have been based, should be avoided for various motives including the aesthetic, economic and ecological ones.

Fabrics have always been among the protagonists of Pastrovich’s projects. He often uses curtains to define spaces on boats which offers the advantage of being able to control the light and create an intimate atmosphere without adding to the weight of the yacht. Today, thanks to his years of experience, Stefano Pastrovich thinks that fabric could be an important ally to increase the safety on board ships in the same way that fabric masks limit contagion.

A division of spaces obtained through the arrangement of fabrics, like in some Japanese rooms, could be implemented both effectively and with aesthetic taste. Fabrics are by their nature easy to install and can be fully sterilized. The solution proposed by the architect would have a low economic impact, a fairly quick turn-around time and, above all, would be an investment that would not only be aimed at solving the current situation but also be able to act as a preventative measure on future cruises.  Eventually, when there is no longer a need for the separation, the fabric could be reutilized for other purposes. 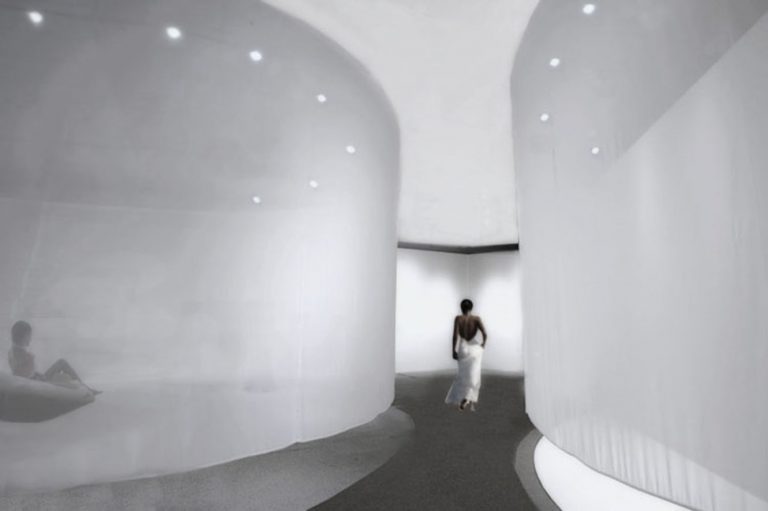 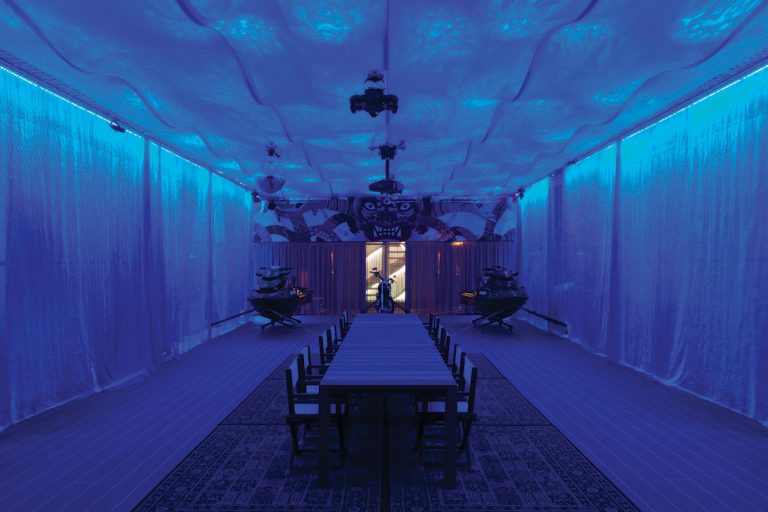 The gravity of the situation that lead to the complete blocking of all cruise itineraries however pushes us to consider more drastic solutions as well. The absence of a vaccine, or of an established cure for the new Covid-19, suggests the need to create a sort of safety path, where the possibility of contagion is eliminated for future cruise passengers. Pastrovich continues, saying: “The job of the visionary architect is to elevate his perspective, observe the facts, see things as if viewed from a drone in flight and to think not only about new ships but above all about new ways of cruising.”

Pastrovich speaks about ships being perceived as essentially “safe ships”, or “safe islands”, which in contrast to a place more subject to the spreading of the infection becomes, on the contrary, an isolated environment that is hermetically protected. “The ship takes me to live experiences in the most beautiful places on the planet. It is a world closed off from the possibility of contagion, but open to the most profound, unique and fulfilling emotions.”

In this extreme scenario, the passengers certified as negative, because they are isolated in the days before the cruise, travel from their home by “certified” transportation to the embarkation to finally go on board the ship that will be the destination of their trip. To maintain the protection while on board, in this possible scenario, during the itinerary there wouldn’t be any stopovers where passengers would disembark, but only panoramic sailing and stops in the most beautiful bays where passengers could go down to the water perhaps with a zodiac or other type of boat directly from the onboard launch.

The ships designed for the new travelers of the future will be small and medium sized ships because these travelers will want to immerse themselves in the experience of nature and of the landscape while remaining on board in a secure environment. They will be ships built with technologies aimed at minimizing the impact on nature, on ecosystems, and on communities, and will be more respectful and designed while keeping in mind the different ecosystems of the planet in which they will sail, to create a symbiotic relationship with nature while remaining on board. The climate and the landscape surrounding the ship will set the scene to amplify the sensations of the place.

Stefano Pastrovich presents the scenario like this, which on first impression might seem extreme because it revolutionizes the original cruise concept – that of a journey in new and unknown lands – and also raises a number of problems that would naturally need to be resolved: The crew? The cost of the cruise? The itineraries available? Let’s not forget however that the concept of a ship as the destination of a cruise is a phenomenon that has already been developed and also has been continuing to grow in the past few years. Ships that offer everything from attractions, marvelous suites, solariums, and restaurants as far as the eye can see today already capture a high percentage of the passengers who choose not to go on land during the cruise itinerary. And not only that. The ships, presenting themselves as a “destination”, can set themselves apart by their configurations, interior design, and their services, and therefore meet the needs of different types of guests with different tastes. So, therefore, Pastrovich proposes models for lovers of tropical destinations, alpine environments, the most classic luxury, of life underwater, etc. 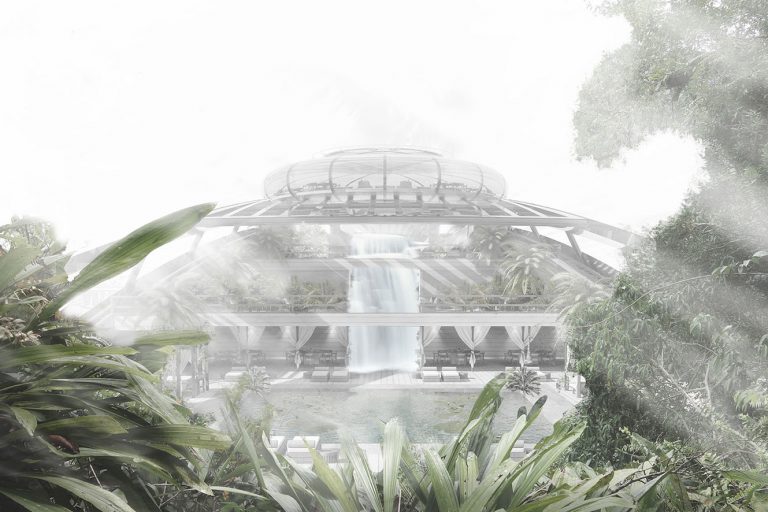 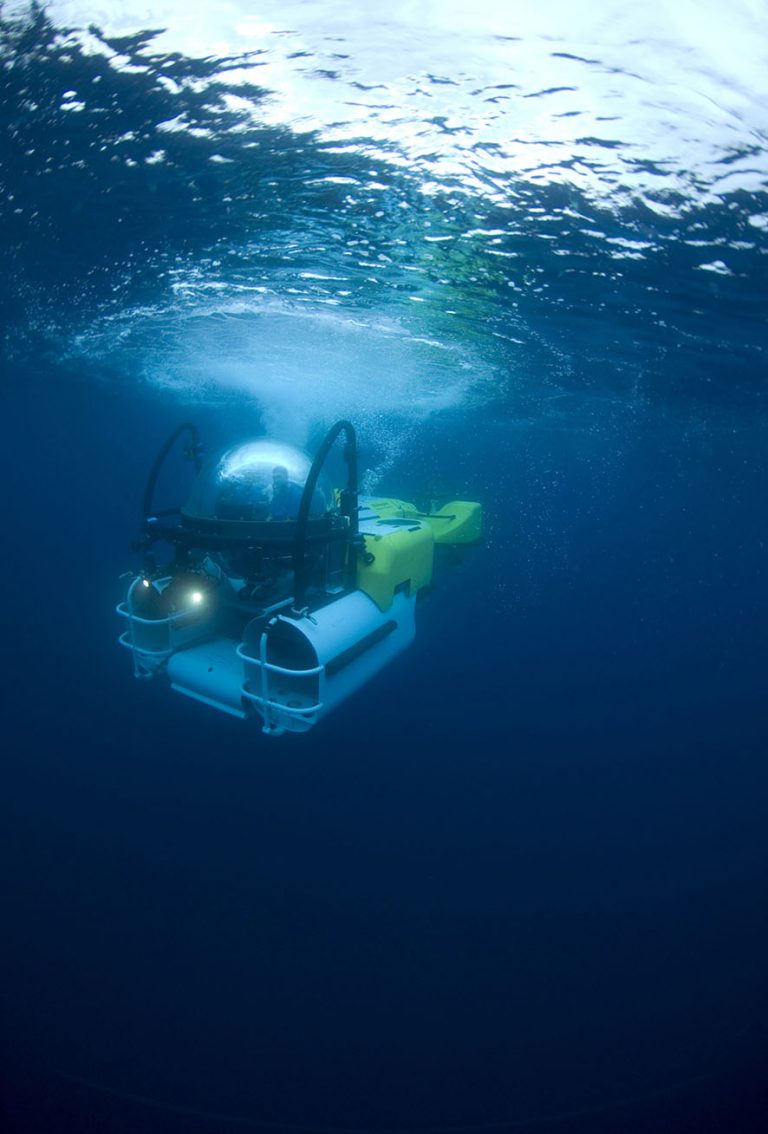 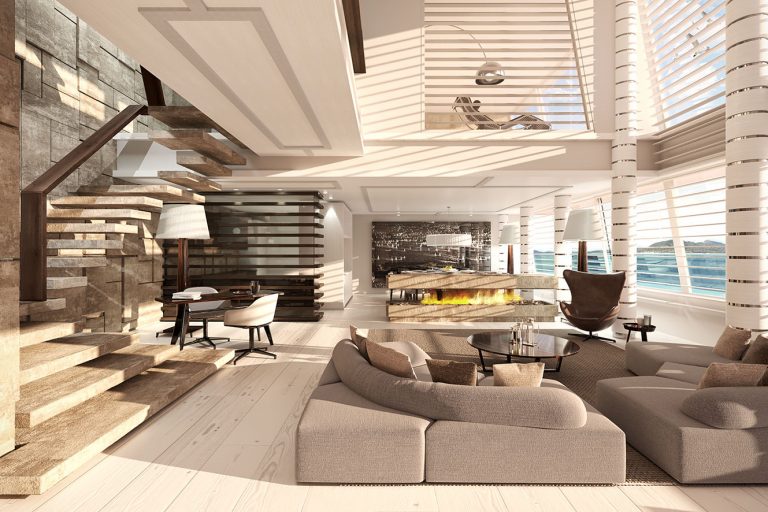 Even if the idea is disputable, it is however true that, in the current state of the medical emergency, it is probably a good starting point to be taken into consideration, especially for passengers in the higher age range. It should be remembered that passengers from 65-70 years onwards represent a major component on cruise ships. Their exposure to a risky situation, which could still persist even after the end of the most acute phase of the emergency, could prevent them from resuming travel. “The ship will provide a perspective on the beauty of the world, more than being a means of transport,” the architect points out, not hiding the extent of the changes.

I realize that this way of thinking about ships and cruises can be disorienting, but I am not passing a value judgement: I am simply communicating a vision of a possible, but also probable, scenario. We are talking about a change we will get used to. It is similar to what happened on a global level when visionary architects started designing “non-places” such as shopping centers, car parks, multiplex cinemas or converting port areas and industrial warehouses. 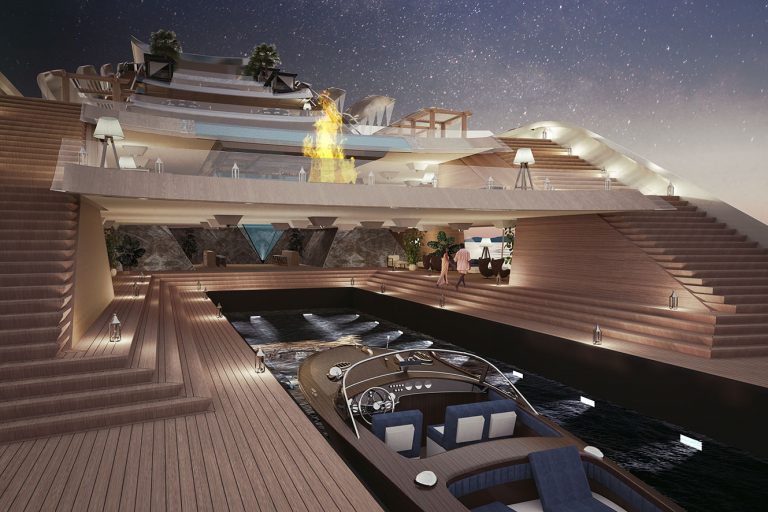 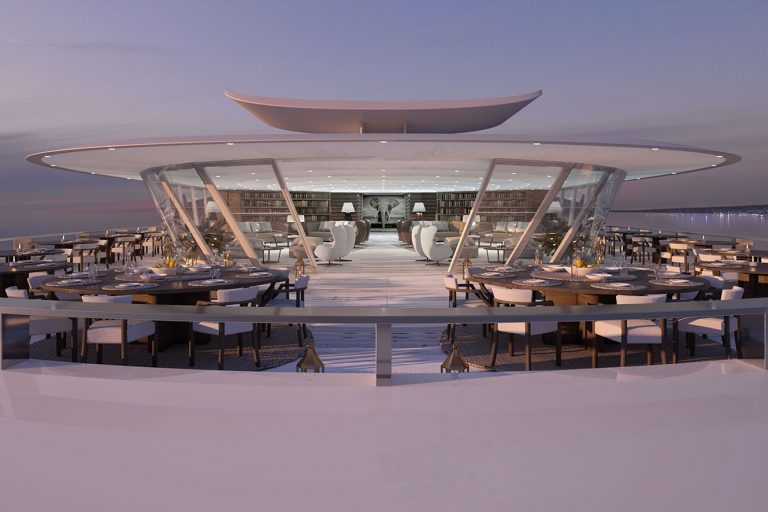 Pastrovich’s solution, with improvements added from the experience of the cruise companies and in accordance with the world health directives (which we do not have yet) could then act as an impetus towards a solution that will certainly resemble that of a ship that acts as an “safe environment”.

The hypothesis of the use of fabrics as physical separation that is aesthetically acceptable and able to be sanitized is feasible on all types of ships and for any type of public. While the hypothesis of creating safe routes for embarking and staying on board without disembarking at stopovers, such as in the second scenario of the architect, is instead something that can be applied mostly to smaller ships and most likely only in the luxury segment. So not for everyone, unfortunately. But if traveling in extreme safety, for elderly people perhaps, means one cruise less but more enjoyable and safe, it would certainly be something to think about. These are changes that need to be thought through, certainly, but just like any exceptional circumstance they could simply become the new normal.

In the beginning it seemed absurd and even abhorrent to get in the car to go shopping in a non-place outside the city. But it happened and until a few months ago it was the marvelous normality that a virus took away from us. The job of the architect, who is a contemporary seer, is to see the future, design and therefore plan it, make it beautiful and therefore functional, useful and responsible. A new concept of luxury, practically, that comes to mean “liberty in safety”.

From the Pastrovich Studio we have heard interesting input for possible short and long term solutions from which we cannot stray too far if we want to be able to start traveling again. But also thinking of a more safe future we hope that from the current emergency we have learned not only solutions but better methods of prevention. The architect says that he wants to research “the fundamentals for a new structure from which to design a new ship that corresponds to the new life that, since the advent of COVID-19, has opened the doors to a new age.”

It is clear that it won’t be achievable in every single last detail, but these hypotheses could act as a guide to lead to a conscientious and balanced preparation for the future of world cruise travel. They could therefore represent a “global vision” that, in the words of Pastrovich, is “a beacon that shows the way” while keeping in mind that “during the journey many things can happen”.